This is a follow-up to a recent post: Creating removable comment command without extra space. I'm trying to do a common thing: make a removable comment command so contributors to a document can leave notes for each other and themselves but so that the notes can be automatically removed before production. The trouble is that it's very easy to generate extra space here.

The solution in the aforementioned post turned out to be this:

It works pretty well, but it's not perfect. Specifically, extra space is added in the event that two notes occur in a row. For instance, consider: 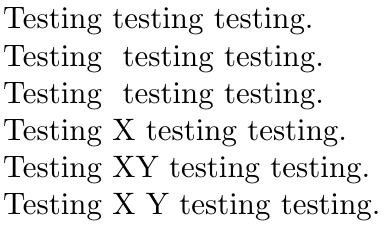 As we can see, the \@bsphack\@esphack is properly eliminating some of the redundant space and works quite well if only one note is left. But if two notes appear adjacent to each other, more space is generated in the result.

One approach that I've considered is that the \note command could figure out that it was next to another note and then avoid emitting the extra \@bsphack\@esphack. My attempts to build similar commands in the past have gone quite poorly, though. Has anyone encountered something like this? My searches came up empty.

A problem is that \@esphack does both check and afterwards change the value of the register \lastskip.

A variant of \@esphack where some "skipping backwards and forwards" takes place might help.

Not the answer you're looking for? Browse other questions tagged spacing macros comments notes or ask your own question.