Adding an “mdtheorem” (i.e. with frametitle) to a List of Theorems

I'm having trouble with either formatting newmdtheoremenv environments, or adding mdtheorem environments to a table of theorems, depending on how you look at it. 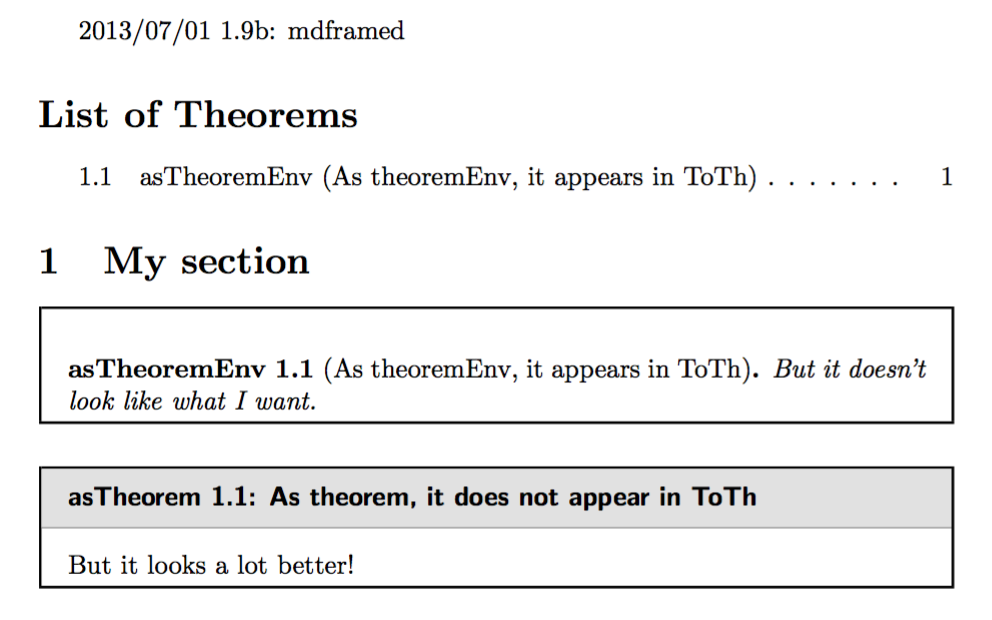 I have found this issue which describes the same problem, but as it dates back to April 2012 and my version of mdframed is from 2013, I think it should not be applicable (and I cannot see in what version it should have been solved).

What I'd want instead, is the environment to look like the latter in the document, but appear in the table of theorems.

Is there somebody who can help me with getting this to work? I don't really care about what exact packages are being used, if

You can teach thmtools to use \mdtheorem as its \newtheorem command. A hint is in the thmtools documentation about how it treats the thmbox option.

If you introduce a new mdthm key as:

then you can write

passing the mdframed options as the argument to mdthm. This produces the theorem style you request and entries in the list of theorems:

Not the answer you're looking for? Browse other questions tagged theorems mdframed thmtools or ask your own question.

19
tcolorbox - list of listings?
7
How to create theorem boxes

4
thmtools: how to put xrefs in argument to thm environment?
5
How can I create a customized environment?
6
mdframed behaves differently in TeXlive 2011 and TeXlive 2012
2
Rewriting a template from amsthm to thmtools
2
numbering different theorem names with thmtools
1
Mdframed for theorems: how to make fonts similar to amsthm and change title format?
0
CAPTIONS with constant numeration but adapted to mdframed environment style
1
Repeating a set of statements on an index page