European convention of voltage in CircuiTikZ

The european norm EN 60375-2003 for electrical circuits is not entirely compatible with circuitikZ, regarding the representation of voltages.

In the norm (section 5.3), there are three methods to represent voltages: 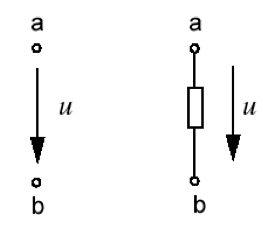 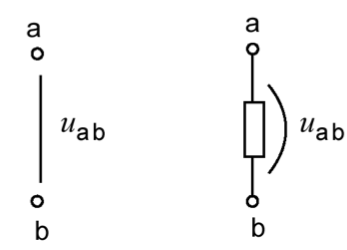 Current version of European-style CircuiTikZ draws curved arrows, in the opposite direction of method 2.

To ensure the full compatibility of CircuiTikZ with the European norm, at least the first method should be supported. Besides, it is extremely close to the American norm. Method 2 is very confusing, and method 3 is graphically the same as method 1.

So here is my question to the community. Is it possible to tweak CircuiTikZ so as to, at least, get figure 5c or 5d ? That is replacing the curved arrow by a curved line, and add a plus sign next to the extremity where the arrow pointed (and possibly a minus sign too) ?

the drawing directions in your examples are all the same, the plus/minus sign shows the electrical potential and the voltage arrows points from a higher potential to a lower potential(technical current direction).

The different direction within circuitikz between american and european voltage counting direction was never(i hope so) intended and fixed with circuitikz version 0.5.

Pls have a look at the manual http://circuitikz.github.io/circuitikz/circuitikzmanualgit.pdf (section voltages).

PS: At the recent git-version there is also a possibility to draw straight voltage arrows, but it is only a beta-version, due to some positioning errors at non-symmetric nodes

Not the answer you're looking for? Browse other questions tagged tikz-arrows circuitikz or ask your own question.