My structure is like this (the numbers are the page numbering I want):

That's also how I want the Table of Contents (TOC) to look like.

Hey guys, thanks for the fast responses and comments! I did some more digging and found out how to solve my problems. I added the three parts missing in the TOC (the TOC itself, the list of figures and the abstract-chapter) manually, using \addcontentsline{toc}{chapter}{Abstract} at the end of the abstract-chapter and

instead of plain \tableofcontents (same for list of figures) It also somehow fixed the problem of Chapter One starting with page 2 despite being on page 1. I have no idea what fixed it, maybe the use of \cleardoublepage?

Use \addchap{Abstract} to get an unnumbered chapter with an entry in TOC. 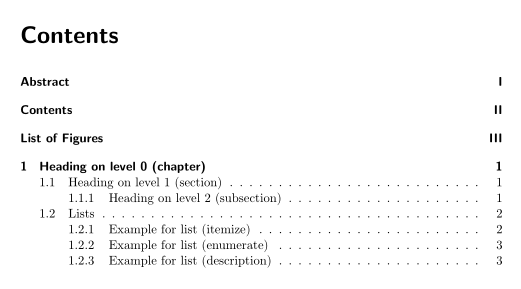 If you're free to switch from the scrreprt to the scrbook document class, you could make use of \frontmatter and \mainmatter directives of the latter class to simplify matters. For instance, by using the \frontmatter directive, chapter-level entries won't be numbered but will still show up in the table of contents.

To mimic some of the layout settings of the scrreprt class, you could specify the document class option oneside and issue the directive \pagestyle{plain} (to suppress running headers).

Not the answer you're looking for? Browse other questions tagged table-of-contents page-numbering koma-script or ask your own question.