Again me, still trying to emulate a very specific layout...

I used the titlesec package to define chapter and section titles, and am very pleased with the outcome... except of some ponts' worth of vertical space that keep showing up in places where I don't want them. Perhaps you guys can help me out here.

The almost-M-WE is below... all pt values in the source have been figured out from the original with a ruler, I left them in because they are as good as any. Never mind the faulty subsection numbering, that's been taken care of in the "real" document.

This code almost works. I have two problems with it though:

Thanks in advance, you guys have been a great help already in my quest into the LaTeX world! 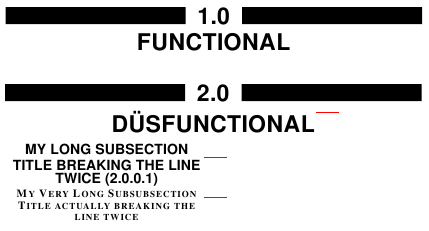 Question 1: You have to "hide" the height of the title

Question 2: You have to avoid inserting the \lineskip when two lines are "too near" to each other

However the spacing won't be uniform if some character is higher than the stated baseline skip (an accented uppercase letter, for example).

Not the answer you're looking for? Browse other questions tagged spacing sectioning titlesec or ask your own question.