Consider the following situation: The tbtags option for the amsmath package is in use, i.e., tags on the right hand side should always be placed on the bottommost line of each eqution. I have multiple equations in a single align environment. All the relation symbols need to be aligned. In each equation I may need additional alignment points. (In the following example the opening parentheses will be aligned.) The secondary alignment points will not be at the same horizontal position. (I.e., alignat can't be used here.) The equations are typeset by nesting aligned inside split and align. 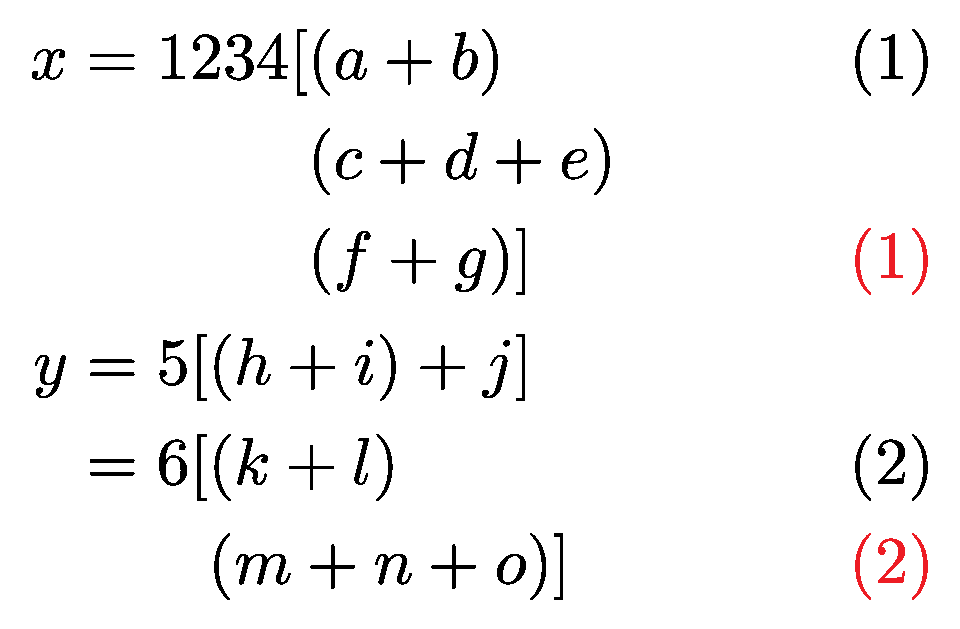 In the image the black font shows the output when compiling the example code. The equations themselves are typeset exactly as I want, but I disagree with the position of the equation numbers. The red numbers show where I want the tags to be positioned.

The equation numbers are not placed on what would mathematically be considered the last line of the equations, i.e., lines 3 and 6. Instead they are placed on lines 1 and 5. (I think this happens because LaTeX-internally only lines 1, 4 and 5 are actually considered lines.)

Can anyone think of a better, more automatic or more elegant solution?

If you have a good solution for the problem above then you might also be able to answer this: How to solve the same problem when cases is used (instead of aligned), i.e., how to place the tag on the line with the last case? In this situation solution 1 cannot be used and the calculation for solution 2 becomes more complicated.

How to tackle the same problem if you have aligned inside cases inside split inside align?

This uses tikz to place (overlay) the tag, consequently it takes two runs to position the tags correctly.

It ignores whether the equation is too wide, since it may not be too wide where the tag is. \taghere does provide an optional argument to apply additional vertical offset. 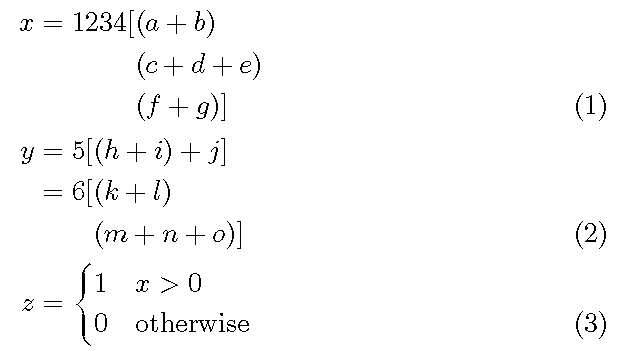 split only allows one alignment point. Use phantoms: 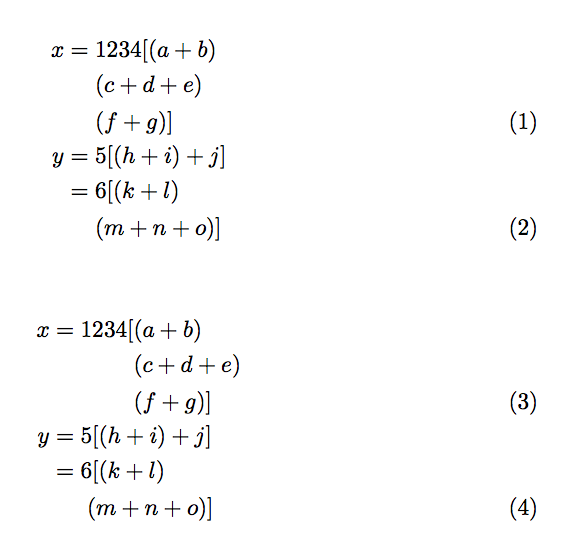 I have been pointed to \pdfsavepos and then found the zref-savepos package. I tried to construct an alternative solution based on this functionality. It works (at least somewhat) for aligned and cases. The implementation basically measures the difference in position of the center and the bottom line and then \raiseboxes everything except the ampersand token.

I am quite unhappy with the syntax of my new commands. It is not flexible and also it is very unlike the standard environments, but this is the best I can come up with right now.

Not the answer you're looking for? Browse other questions tagged numbering positioning align amsmath tags or ask your own question.

8
Equation number in aligned environment after last line
6
Does \raisetag actually do anything?
2
Multlined in align enviromnent: alignment of "RHS =" and equation numbering
3
Align QED symbol with last row of table
1
How can I position the tag of a "nested" aligned environment?
1
Put text at the page bound (flushright) in math mode
0
Scale each line of a multi-line equation separately if it exceeds the linewidth