Is there a way to draw TikZ lines on the "inside" or "outside" of a path?

In this answer, Jake points out

The miter option is more "correct" in that it doesn't add new corners to a shape or introduce rounding. In some cases with very sharp angles, the results might be undesirable though, as in the question you linked to...

in reference to this question. It's certainly true that for very acute angles, a mitered joint will extend far beyond the coordinate where the two lines intersect. In some sense, this is because TikZ draws lines centered on the specified coordinates, which is almost always the desired result. But in this circumstance, it might be better to specify the outermost point of the miter as the "endpoint" of the lines, and have the strokes be entirely uncentered and to one side of the coordinates or the other. Illustrator (for example, because I have it handy) supports this, but only for closed paths, where there is a well-defined "inside" and "outside" to the path. For an acute angle, you could reuse "inside" or "outside" in a semi-sensical way, but that terminology may not generalize to single lines... For lack of better terminology then, I'll reuse "above" or "below" or "left" or "right", as are used to describe label positioning.

Is there a convenient way in TikZ to specify lines as being drawn "above" or "below" their coordinates---effectively being offset by exactly half the line-thickness in the direction perpendicular to the line? And is there a similar solution for drawing curves "above" or "below" their coordinates (not as easy to say "perpendicular to the line", though still mathematically possible)? If there isn't a good solution for arbitrary open paths, is there a good one for closed paths, as in Illustrator?

EDIT: To answer Andrew's question, Illustrator draws the following path by default, "inside" and "outside": 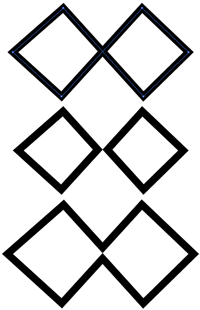 The top path is selected, which is drawn in blue highlighting. That stroke is "default", or centered. The middle is "inside", and draws the two subregions separately. The bottom is "outside". Here's a twistier, more self-intersecting example, that shows Illustrator has a miter limit, as well as an algorithm that seems to be parity-based: 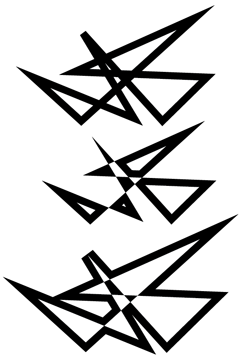 Note that Illustrator limits "inside" and "outside" to solid strokes on closed paths only: if you attempt a dashed stroke, or have a non-closed path, or try tiger-striping like in Andrew's example, it disables the inside and outside options, which makes me wonder whether there happens to be a convenient PDF or PS command for offsetting simple strokes on simple paths, rather than a more robust solution...

I completely agree that the choice of side is not local, but on the other hand if you pick a single option for the first segment of the path (e.g., "to the right side, when headed from the first point on the path to the second"), it will stay consistent for the rest of the path.

EDIT: To follow-up on my commented question to Andrew's answer, here's what TikZ makes of his solution as applied to the figure-eight example he gave. The paths here are drawn in a figure-eight, starting in the direction of the arrow. They use the reverseclip style from this answer, and the exact path used is drawn in color over the clipped versions: 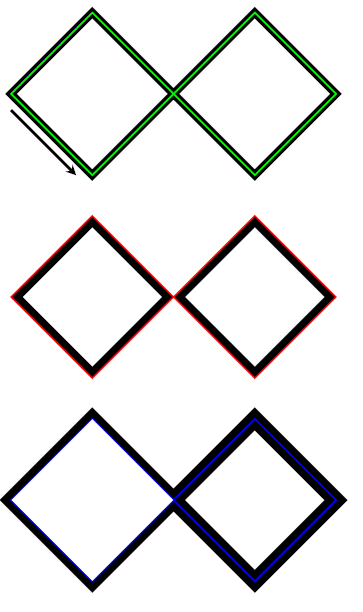 The red example uses clipping, and gets the "inside" to match Illustrator's behavior...but the blue example uses reverse clipping, and gets confused in the right half of the image. If I draw the figure-eights in the other orientation, then the red example stays the same, but the blue example gets confused on the left half of the image. And finally, the exact same styles, but using the "twisty" path I had above: 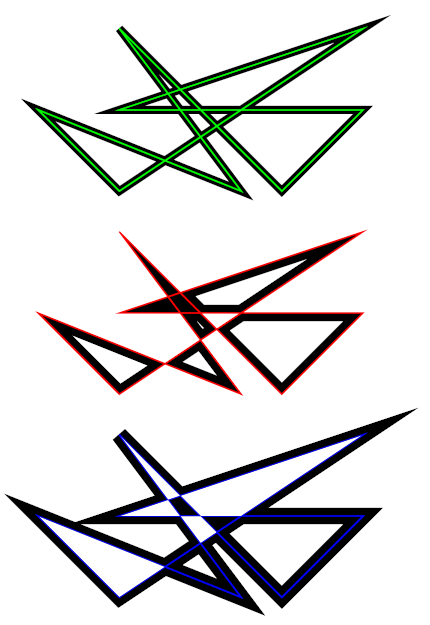 Both the red and blue paths are slightly confused, and while they don't follow Illustrator's even-odd algorithm, I have no idea what algorithm the are following...

(And finally, the TikZ code for the twisty paths I used, for anyone who wants to reproduce the behavior I'm seeing:

I was idling thinking how one might go about this, when I came up with a very simple solution. I wouldn't be surprised to learn that this is what Illustrator does. Looking at the diagrams, it would seem that way.

My initial plan was to figure out some sort of decoration that would "shift" a path to the left or right, but that just seemed fraught with difficulties. But I couldn't think of a way to get TikZ to treat the two halves of a path in a different manner. Then I realised that there is such a way: clipping.

When TikZ clips against a path then the two sides of that path are treated in a different manner. So that can be used to get it to only draw one side. Sort of. You draw a path, but clip it against itself. Since the clipping path has no width, this means that half the path gets drawn. The "Sort of" is because the decision about which half depends on the region that is being enclosed, not the actual side of the path. This, I think, leads to the funny look on the Illustrator images in the question.

A general solution to this would involve a command to draw and clip in the same breath. That could be done with my spath library (still in development, but available from the TeX-SX site on launchpad), and one would have to use the "reverse" clip method from somewhere around here for dealing with the other side. But to demonstrate the concept, we can just do it by hand. Here's the cube:

and here's the code:

Note the scopes to limit the clips, and the doubled line width, since we lose half of it in the clip.

This is really a comment, but I want to post a picture. In the spirit of "A picture paints a thousand words ...", can you tell me what Illustrator considers to be the inside and outside of this path:

I realise that you say "where there is a well-defined "inside" and "outside" to the path", so presumably Illustrator can't cope with that example. The point I wish to make is that the request is not a local one: you can't consistently define the "inside" and "outside" of an arbitrary path. When you examine a particular join, you have to take into account all of the other pieces of the path to work out what should happen.

An alternative would be to have TikZ always adjust the join to shift it to the inner angle. This would work as it is a local property, and the fact that the function is not continuous at \pi/2 wouldn't matter because you'd never notice the discontinuity (it's a rare picture that has a family of lines converging at one point from a whole range of angles, and for that you could just turn off the facility). However, I don't think that that would solve the basic problem. The join would still look as bad, it would just be shifted. Here's a cheap example of what you'd get:

(Cheap because it has the outer path as well, this was done using the double option.) The inner line looks just as awful as the outer line.

There comes a point in any diagram or document where the computer has to say, "Here's my best shot." and the person has to look at the result and say, "That's not quite what I wanted, let me adjust things a little.". I think you've just reached that point. One of the great things about TeX (and thus, by extension, TikZ) is that when you want the autopilot to turn off and for you to resume manual control, it does so gracefully and elegantly.

(As I said at the start, this is a comment, not an answer. I'm sure that someone could implement something that did this automatically and it would be an awesome bit of code.) 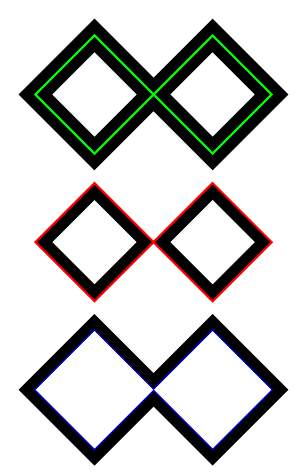 Result with your "twisty" path: 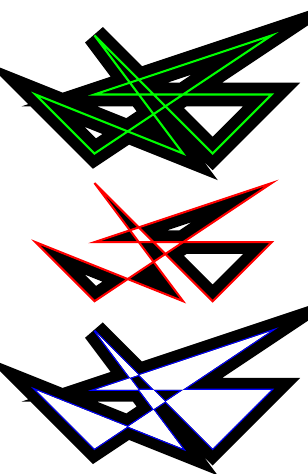 One approach is to use path decorators. They do not look at inside or outside, but on the direction in which the path is drawn.

This is not exactly what the original poster asks about, but this could be the start of a solution. See example and code below. 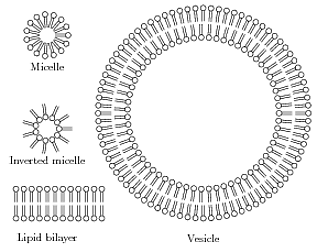 78
What is the easiest way to draw a 3D cube with TikZ?
64
How can I invert a 'clip' selection within TikZ?
18
What tips and tricks are there for debugging TikZ/PGF code?
21
In TikZ when is "line join=miter" the preferrable over "line join=round"?
20
How to fix TikZ corners in 3D
8
Filling a box excluding circles inside it
5
Imperfect cube vertices
7
How can I shrink a path to the center?
6
How to raise a generic curve. Problem with \pgfdeclaredecoration
3
Not able to include even the simplest animation in my presentation
See more linked questions

4
TikZ. Is there a way to alternate path to be drawn basing on some condition?
6
Draw reversed path in TikZ
13
Draw curved path inside circle
1
Close scope for global options in a tikz-pgf path
9
Line up nested tikz enviroments or how to get rid of them
5
tikz path use draw area
14
How to draw a (colored) arrow on a path?
4
Named paths inside a tikz/pic
1
How to draw a line along the path?
6
Is there a way to draw the rest of a path by mirroring the existing part?