In French, there's a narrow non-breaking space before ":". These are automatically added by the babel package, of course. However, I noticed something strange: the following macro

produces "abc: abc", without the narrow space. Thus, in the following MWE, the two output lines are different (the one produced with the macro looks like "abc: abc" while the other is correctly typeset as "abc : abc"), and I expected them to be the same:

I searched for some times for a solution and mostly found people complaining about the spacing after a macro, so it wasn't very helpful… Of course I can write "~:", but it would be very surprising if there wasn't a better solution. It's weird that it took me several years to run into this problem. Maybe it has to do with the fact that I'm on Debian today instead of Ubuntu, but that sound a bit far-fetched. Any help will be much appreciated!

The babel package has a package option KeepShorthandsActive which allows shorthands to be used in the preamble: 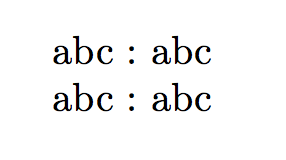 Not the answer you're looking for? Browse other questions tagged spacing macros punctuation french or ask your own question.