I am writing my application for a position and would like to include versions of the content in both German and English.

I would like to have a page right after the cover of my application which contains two ToCs next to each other however each displaying things that are only in the specified language.

So far I have found out how to add two ToC like this:

As you can see things are far from done. I'm not that much into the LaTeX gimmicks so I have no idea if what I'm about to ask for is even possible.

The first question is: Is it possible to customize a ToC to show only entries the fulfil a specific condition? In my case the condition would be: is the section name in German or in English? If it's in German than show only in the left ToC else if in English show only in the right ToC. In addition it would be amazing if an entry can have both conditions fulfilled so that it can appear in both ToCs (for example a certificate that I don't have the translation for and there is no need to add it twice just for kicks). I would imagine all the above would work with some sort of if and adding some sort of a value for German and English sections that is then checked and based on it ToC is populated accordingly.

Continuing this line of thought and if you are familiar with both languages you might have noticed in the image above that the entries 1 and 2 mean the same (but in a different language) as well as the entries 3 and 4.

This leads me to the second question namely: Is it possible to use some sort of condition that would allow two sections to have the same number?

At the end here is what the page should look like:

EDIT: Thanks to the amazing @ChristianHupfer it's almost done! One last problem is the removal of the blank entries in the toc that doesn't have entry X,Y and Z but ftoc has them: 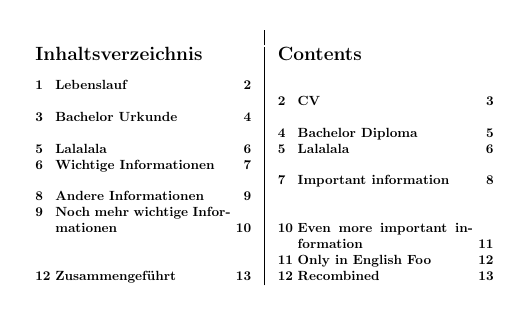 The image above corresponds to the code below:

I have the feeling that I might not have explained things well enough (sorry about that!) - a section in a different language actually has to appear as a separate section. So the code above suits my needs best with the small visual annoyance that blank entries are left in the both tocs. Is it possible to remove these? It's not such a big deal but I believe that things would look much better especially for other readers of this whole topic who want to use the solution(s) provided in a larger document where multiple entries can appear in just one of both tocs leaving huge blank spaces in the other toc.

Here is a version with an additional optional argument to \section that holds the English version of the section name for the table of content. If the [...] is omitted, nothing is entered to the ftoc (meaning foreign toc).

Not the answer you're looking for? Browse other questions tagged table-of-contents conditionals two-column languages or ask your own question.

7
Two Column Layout for Tables
7
titletoc: How to format mini/partial tocs for each section (hspacing, vspace of entries)?
16
How do I set up two independent tables of contents
3
A TOC with size count of each of the parts
6
A table of contents for each section. Including only the entries of that section
1
Second ToC with per-chapter author
4
Sort tableofcontents
4
tex4ht: including section/subsection number in toc link
0
Two tables of contents, the second one with selected sections