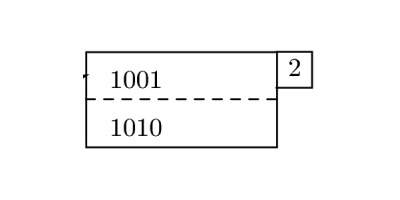 The best I've come up with is drawing a split rectangle, with a style like

(taken from here). But I can't figure out an elegant way to add a third part other than create an extra node every time and position it properly. I want to be able to create the nodes with a one liner like \node [entry] (A) {1001 \nodepart{second} 1010 \nodepart{third} 2};, but I'm not sure how to go about that.

Well, if you're open to a slight change in the syntax and some hackery, you can create frankenstein nodes by abusing TikZ's label, pin and append after command options.

The rectangle split shape already is close to what you want. However, it doesn't allow using a different line style for the separator. We can, however, prevent the separator from being drawn at all and provide our own path. This is done using an edge operation in the append after command.

The attached rectangle can be drawn by using the label option. Properly positioning it involves a shift so that the borders overlap each other, which is done with the outer xsep option. To allow references to this new node's anchors, we also give it a name which is constructed from the name of the main node.

A caveat is that you can't use the anchors of the extra node while the construct is being placed. Also, the contents of this node are an option to the style instead of a real node part.

9
TikZ Node with multiple shapes
6
Is setting every node style anchor compatible with relative positioning in TikZ?
16
TikZ rectangle split parts with fixed height
12
TikZ nested rectangle split with rounded corners
5
Circuit Node with Text near Input and Output
4
Tikz: Node with text height = paperheight causes pagebreak. Where does the space come from and how can it be eliminated?
2
Attaching a node to a table cell
4
Create cutout of rectangle, where cutout is also node
3
Arrow between BTrees
5
TikZ rectangle split and ignoring empty parts problem