Long time reader, first time poster. I just can't seem to find a solution to this problem, so I defer to your expert advice! I initially tried to create a TiKzpicture inside of a node of a TiKzpicture, but then when I tried to draw edges between nodes within the inner TiKzpicture, I got the following error:

(The error actually didn't fully display the line, no matter how I tried to coax TexStudio to tell me what the full error was, so I just copied the first offending line.)

I read this post (I don't have sufficient reputation to post links with appropriate formatting. Ugh!! How to avoid nesting of tikzpicture? ) One solution proposed was to create a lrbox which would contain the TiKzpicture, and then to use the command declared in the preamble of the document as follows:

This actually solved the problem above, and the edges were successfully drawn between the desired nodes (e.g. (w0, v0) and (w1, v1). However, a new problem has arisen: I'm trying to draw an edge from a node within the TiKzpicture contained in the lrbox to a node in the "outer" TiKzpicture. From my understanding, the contents of the lrbox are rendered before the contents of the outer TiKzpicture; however, I'm not sure how else to approach this. 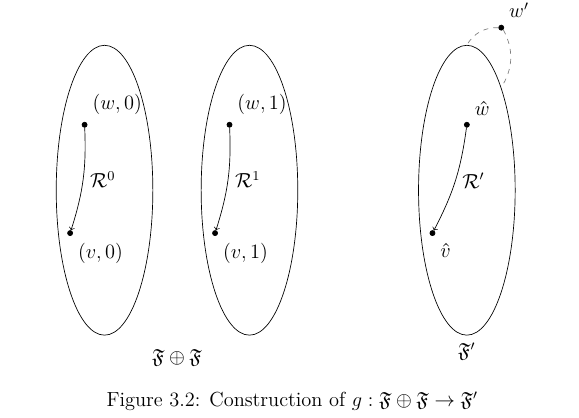 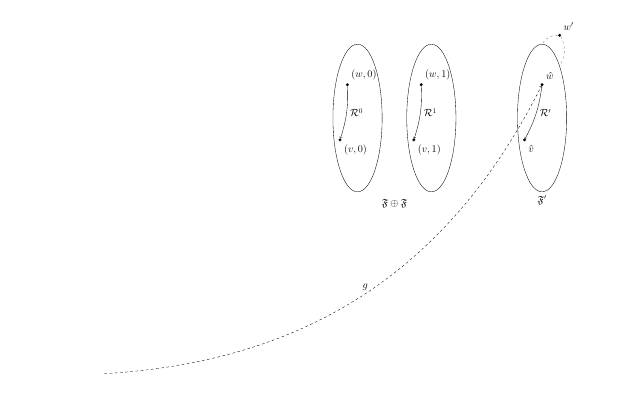 Are there any alternate solutions where I can nicely position the worlds within ellipses and have edges between these structures? Thanks so much in advance!

EDIT: I would also like to note that I am using the \disjUn TiKzpicture in a lrbox as a component of two TiKzpictures; I liked the fact that I could edit the diagram in only one place, and have the changes reflected in both diagrams! However, the fact that I cannot seem to draw edges to nor from nodes within this environment is problematic :(

A friend of mine recommended using \begin{scope}[...] \end{scope} to contain the different structures, but there's still the problem of code re-use, and positioning the worlds (the black dots) relative to the ovals... Thanks again for reading! :)

EDIT2: Thanks to AJN, I discovered that I had originally used the

Argument in the wrong TiKz picture; it is meant to be on the inner TiKz picture; I suppose that this is because we want the compiler to remember the node names for use in the parent TiKz picture.

I don't see why you need a separate box or a pic here. Since you are loading fit anyway, we can simply use that to contain the two nodes F0 and F1.

Note that \tikzstyle is deprecated as is the <direction> of= syntax. arrows and shapes should be similarly replaced with their updated counterparts.

The first can be replaced with \tikzset:

For the second, the positioning library's syntax is preferred and you're already loading it so, again, we can simply use that. For example,

In place of shapes, we want shapes.geometric which provides the ellipse. The updated version of arrows is arrows.meta but you aren't using it, so I've not loaded either here. 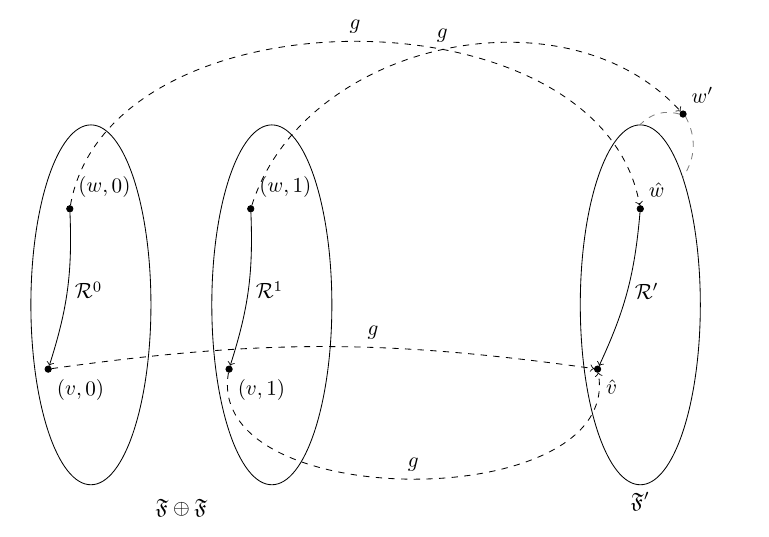 The following is the updated code; thanks to AJN to their response! :)

Which produces the following output: 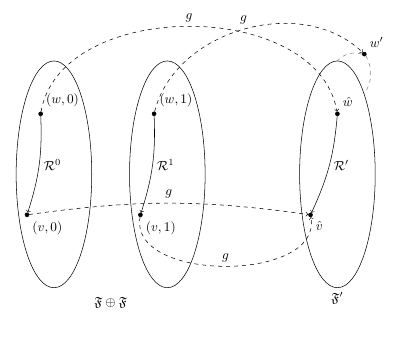 Funnily enough, if you remove the 'remember picture' argument from the outer TiKz picture and compile in TexStudio with PdfLaTeX by pressing F6, the picture breaks in different ways with a cycle of length 2 LOL. Not sure how I can explain this... Will definitely require more research! :) Thanks again for everyone's assistance!

39
What should be included in "good practices" for Tikz 101
16
How to avoid nesting of tikzpicture?

14
Rotate a node but not its content: the case of the ellipse decoration
15
Natural transformation arrow with TikZ
21
How to define the default vertical distance between nodes?
7
Draw edge on arc
16
Numerical conditional within tikz keys?
18
TikZ: Drawing an arc from an intersection to an intersection
4
Line is not centered between edges of nodes
9
Line up nested tikz enviroments or how to get rid of them
10
How can I draw angled lines in LaTeX to create ruled template for calligraphy?
3
Document header with tikz