Tikz: order of execution of child options when foreach operation is present

I'm trying to write a code that will draw a tree consisting of 2 children for each node up to a specified depth. The drawing of the tree itself works but applying the styles (which are numbered consecutively in the order the children are drawn) doesn't. I'm incrementing a counter for every child and if I manually write out the code of the tree, all is fine. However there seem to be some subtelties with the foreach operation that I don't understand. Here is an example not very "minimal", since I can't pinpoint the problem. The first bit works as expected, only the specified node is drawn in a different color. But if I request that child to be missing, then it's sibling also disappears. I don't know if it's related to the unexpected result of the third part of the example, which increments another counter only on the second execution of each of the nested foreach loops, yet the counter seems to step by 2, not 1. Any insight into this is much appreciated.

@cfr suggested I use Forest: I will have a look at it. However, I'm not sure to what extent it is useful in my case or how long it would take me to rewrite my code using it. Since the actual example is way more complicated--I have 500 lines of code (almost done) that takes input of the form ::!::!...., and for each path specification of the form rrllrlrl (for move right/left) it sets the lable of the first edge to and the color of all edges to ; if a new path specification is encountered after !, then continue from where the previous path ended (applying label and color to the new path); if a new path is after a coma, then start at the root again. Furthermore, every time a change in direction is encountered, such as when I say rl or r::!l:..., then continue the previous path in the default color. ALSO, unless one of color or label is given, or the edge style has never been set (missing), do not override previous values. Finally, the last path specification (before a coma) should be continued until the top of the tree (i.e. the color should be applied until the end of the edge, on its corresponding side, left or right)... So for example saying rl:a:green!r:s:red,l:a:blue!r:c:red should give (but with the labels midway next to the edge, I just drew that "by hand" now quickly): 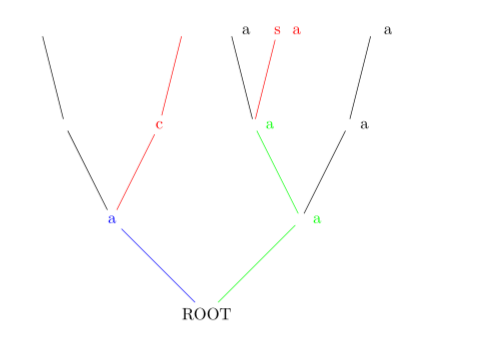 Not really a solution, but I found a workaround: redefine the missing style to simply not draw the edge and hide any text given to the node:

For the last tree, ensuring that foo=\n and foo=\m within the scope of the relevant foreach gives the expected result:

Not the answer you're looking for? Browse other questions tagged tikz-pgf tikz-trees foreach or ask your own question.

6
Probability tree using TikZ for Bernoulli experiments?
14
Rotate a node but not its content: the case of the ellipse decoration
1
Adding vertical arrow to Tree Node using TikZ/PGF
2
Tikz-Tree: Arrow-style depending on parent node
6
Clear and readable syntax style for tikz trees with edge labels and options
16
Numerical conditional within tikz keys?
2
Drawing graph decomposition as a tree
9
Line up nested tikz enviroments or how to get rid of them