TikZ: Rounded corners at the closing point of a path

It's a known problem in TikZ that artefacts are introduced when using the rounded corners option with a value that is larger than about half the distance between two corners (see e.g. Dynamic radius for rounded corners). Now consider the following MWE.

The path drawn by this code contains two corners, equivalent in every way except that one of them happens to also be the start and end point of the path. Without corner rounding, it looks like this:

Unfortunately though, when we introduce the rounded corners option, the resulting picture contains the familiar artefacts: 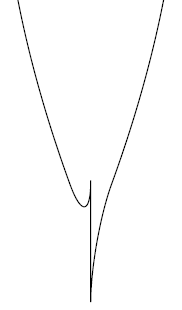 I guess that using cycle to close a path, does not behave the way I assumed it does. I.e. I would expect cycle to basically merge the start and end point of the path, thus creating just one corner at this merged point. Instead, it seems to behave as if there are two corners there, at zero distance from each other, making any nonzero rounding radius too large.

I've come up with two workarounds (see below for the code):

The code for these two workarounds and the resulting pictures are shown below.

My question then is: can I use the combination of cycle with the in/out options for the to operation together with rounded corners without having to change the start point to some point I might not know? (Obviously using a copy of the start point instead of the keyword cycle doesn't improve things here, in that case the second corner just isn't recognized as one and rounding isn't even attempted.) Or is there another straightforward way to get the TikZ picture I'm after?

Tarass' answer (https://tex.stackexchange.com/a/302811/25596) gave me an idea for a possible third workaround, using a "warm-up" line and a "cool-down" line together with the shorten option. However, it appears that shorten and rounded corners don't play together.

Presumably, all you want is a smooth shape passing through certain points. If you want something a little less elliptical, add more points.

How not to draw a part of this path :

Not the answer you're looking for? Browse other questions tagged tikz-pgf rounded-corners or ask your own question.