I use biblatex (with biber as backend and apa as style) and in my document, I cite several sources whose first author is (say) Alan Smith. Everything works fine and is cited correctly (as per APA 6th). Now I insert a citation with a co-author who has the same last name (let’s call him Bertram Smith). Bertram appears only once as a co-author (and never as a first author): on a paper authored by both Smiths and another author (Smith, Smith, & Williams, 2010; where the first author is Alan, not Bertram). Now I get two unexpected (and undesired) effects:

First, the paper with the two Smiths is references as “A. Smith, B. Smith, & Williams, 2010”. That is incorrect: According to APA, disambiguation is only needed for first authors of the same surname. Bertram is not a first author (anywhere in my document) and the fact that both names appear in the same citation does not call for any disambiguation.

Second, the name of the heavily cited first author (Alan Smith) is shown as "A. Smith" in ALL citations of works (first-) authored by him (e.g., A. Smith, 2005). This looks terrible and is incorrect as per APA. Note that Alan is the only person named “Smith” who appears as a first author in my text. Thus, he should never be disambiguated by means of his initials.

Does anyone happen to know how I can correct that? Any help would be greatly appreciated!

Edit (2): I am aware that I have "uniquename" in the biblatex parameters set to "init", because I want and need that feature for some names - but not when it's unnecessary and incorrect... 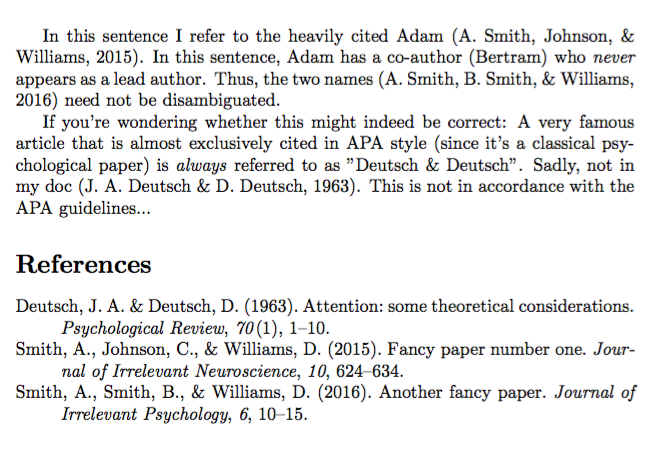 This was really a bug in the APA style, thank you for reporting it. I hadn't noticed because in some cases, the style was doing the right thing (but for the wrong reasons). To properly address this, I had to add a new feature to biber and a new test to biblatex (\ifuniqueprimaryauthor) which is reasonable as it can be useful for a style to know this. To try this, you'll need the latest biblatex 3.4 DEV version and the latest biber 2.5 DEV version from Sourceforge. You'll also need the, as yet unreleased v6.9 of the APA style from here:

Not the answer you're looking for? Browse other questions tagged biblatex biber apa-style or ask your own question.

3
Biblatex Name Disambiguation only for Single Authors?
0
biblatex: How to only have first name initials when a reference would be identical? (Instead of for all authors with same last name)