I am trying to draw several parallel arrows between the same nodes, to get roughly this result: 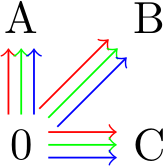 What I would need is a hypothetical perpendicular shift key, which would shift the edge along its perpendicular. Using xshift works for the vertical lines, but not the horizontal ones, and vice versa for yshift. 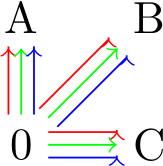 @Torbjørn T. mentionned this very similar question, which gets the line distance and arrowheads right, but alters the line length (the lines start and end near the nodes' centers, instead of starting near their borders): 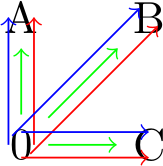 Here's the code for the brace version:

I'm looking for a solution that can be used simply as a style on the whole path, and doesn't require knowing the angle of the line where it is used.

Defining a custom path decoration seems to work, although I'm not sure I did everything as it should, so bugs may arise in corner cases. 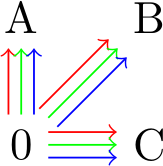 Not the answer you're looking for? Browse other questions tagged tikz-pgf decorations or ask your own question.

14
Rotate a node but not its content: the case of the ellipse decoration
5
Arrow heads as plot marks
21
How to define the default vertical distance between nodes?
18
TikZ: Drawing an arc from an intersection to an intersection
12
Drawing rectilinear curves in Tikz, aka an Etch-a-Sketch drawing
9
Line up nested tikz enviroments or how to get rid of them
1
TikZ calculate in/out-angle from nodes
0
Drawing a line (A) and then draw another line starting in the middle of line A
3
TikZ style that shifts a path perpendicular
1
How do I change the radius of circle in a node in tikz style?