How to write macro with variable amount of text variables

I am trying to make a signature block macro that accepts a variable number of text variables so that I can add or subtract the text without using empty fields "{}" as arguments.

In the macros the first two variables are horizontal placement of a line and length of the line, the rest of the variables are text.

Which, when compiled with lualatex produced: 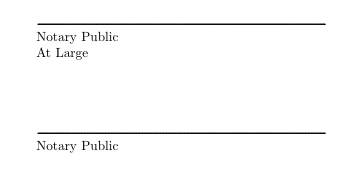 Along with plenty of errors in the log file. In my MWE I tried using \renewcommand to replace \sigblock with \sigblockB. It did occur to me that there might be a solution involving \let. A solution that would "scale" to allow additional lines of text would be best.

When I fill out a signature block, I often have to cut and paste information. I personally find a series of brackets to be easier to do this with in the first instance and then later helpful in proof reading.

I realize that my question reflects my ignorance on how variables work. Both an explanation of what is fundamentally wrong with my attempt, and a solution, would be greatly appreciated.

Though I recommend to use the answer from @egreg here is a way to implement what you are looking for using \@ifnextchar. The idea is that \sigblock prepares everything until it comes to processing the lines beneath the signature field. Then \sigblock@ is invoked which will set the next grouped argument as a line beneath the signature field and starts a recursion. The recursion terminates when there are no arguments left over:

Note. As the extra lines are optional you might want to write \sigblock{0}{3}{Notary Public}[At Large]... sticking to the standard interface design with brackets denoting optional arguments. In this case you would define:

You're overthinking: the tool is already there, namely tabular.

If you need to add \singlespacing, remember it is not a command with an argument, but a declaration. So you should have

By trying to solve this problem I've come up with a possibly interesting macro, so I want to share it here. This macro is called \vardef and allows us to define a macro which can receive a variable number of arguments (any number, not limited to 9 arguments) enclosed in curly brackets.

If, for example, one \vardefines the macro \mymacro as follows,

then the "execution" of \mymacro{first}{second}{third} gives the "output"

and the "execution" of \mymacro{first}{second}{third}{fourth}{fifth} gives

This is how \vardef is defined: 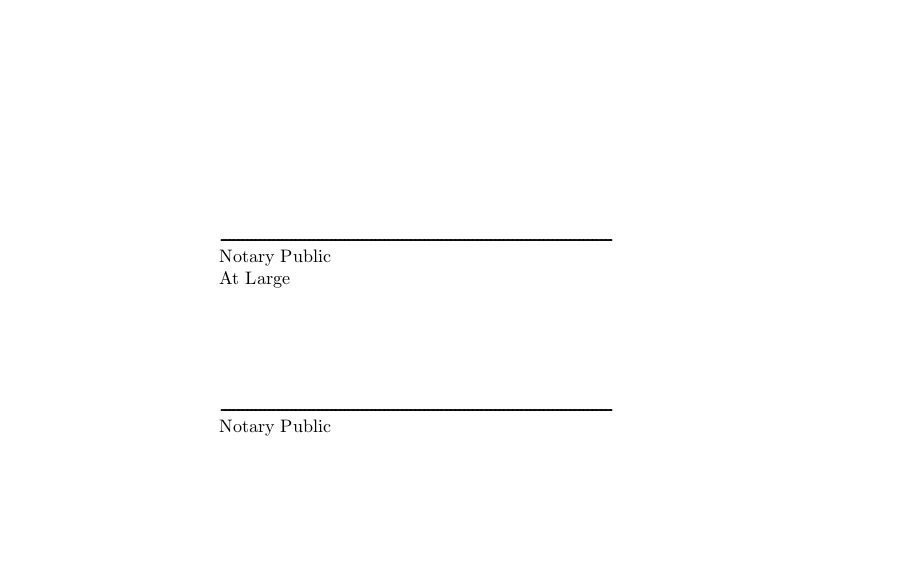 And now it is extremely easy to use any number of arguments in \sigblock.

NOTE: Differently from normal macros, in a \vardefined macro all arguments have to be enclosed in curly brackets and there can't be spaces between the closing brace of an argument and the opening brace of the following argument.

Here's a easy way with xparse and using an optional g argument, which allows to use an optional argument to be used with {...} group pair. 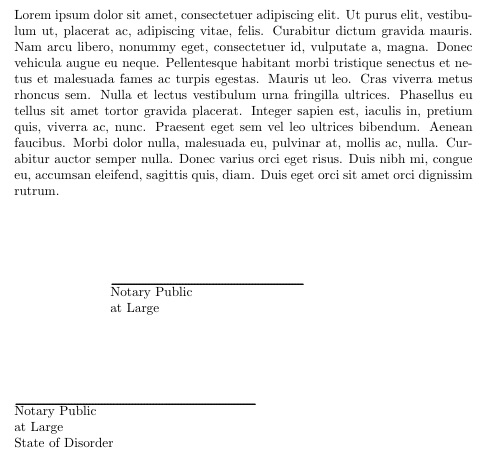 Another answer from the perspective of "you don't need variable variables". This uses \long\def and adds a \vtop box to the material under the line.

Not the answer you're looking for? Browse other questions tagged macros conditionals programming optional-arguments xifthen or ask your own question.

13
Command with variable number of arguments to format menu sequences
5
How to define a command that takes more than 18 arguments
8
Creating a right aligned signature block
4
How do I install and--or use opmac using texlive?

31
Define same command with different amount of parameters
26
Delimiting a macro argument with the macro itself
5
Own document variables with and without arguments
6
How to extend a macro for e-mail addresses to support multiple arguments?
2
How to switch macro expansion by giving optional arguments?
9
How to write a macro that takes a variable number of arguments
6
\def macro with multiple parameters
5
How to calculate the variable in foreach with ifnum?
0
replace text with variables