I'm looking for a BibLaTex citation style that does this:

Should looks as follows:

I started out with verbose-ibid which is pretty close. Is there any style that exactly fits what I want? And if not, is it possible to change an existing style to get what I want?

I can't provide an answer that ›does it for you‹, but what you're describing is very similar to a style I've been working on recently. The idea is to have a full citation in a foot- or endnote the first time, and a short citation (albeit author-year, rather than author-title, but it doesn't really matter) for every instance thereafter. Ibid or not can be included as an option.

The reasoning behind it is this:

The style is (aptly, I hope) going to be called authoryear-verb.

Here's a rough example that you can run using authoryear-verb.cbx which I've uploaded here (temporarily). You can use it as a basis to work on. ›Simply‹ replace my authoryear-related parts with the ones from the style you've identified as the closest to what you want. 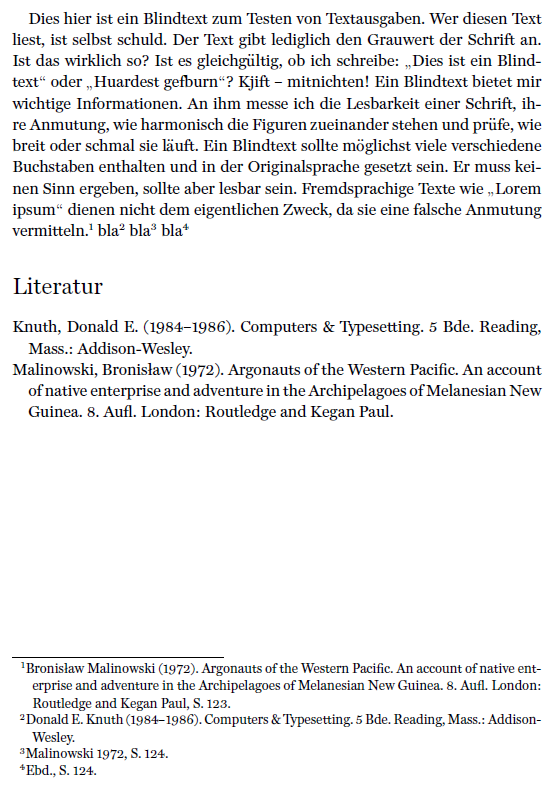 561
Where do I place my own .sty or .cls files, to make them available to all my .tex files?

5
Biblatex, verbose-ibid, journal title for repeated citations
8
Elsevier style citation for biblatex
4
First full title, then short title in \autocite: biblatex-chicago authordate with entrysubtype={classical}
2
Biblatex: Refer to footnote of first citation in citestyle verbose-ibid
3
Biblatex ibid in lowercase if prenote is present
0
Force biblatex to print initials of the author even in the following citations
0
Using `\headlesscite` with `biblatex-chicago`: how to keep ibids lower-case
3
Printing “ibid” for biblatex-chicago authordate style
1
BibLatex verbose-ibid full cite after every change of reference
0
Is it possible to have something like authoryear-icomp without ibid?