I want to write direct in a Latex document several languages, for example: संस्कृतम् - ελληνική γλώσσα - Latin - ꦲꦤꦕꦫꦏ - egypt hieroglyph - and more... So, my question is, how I can use "Xelatex"- Unicode in the preamble to write direct these languages? I tried to use \usepackage{xunicode}, but did not work... *And a second question, Have a list for supported languages in Unicode and the font type avaiable to write them direct in Xelatex? In the meaning, for the languages supported in Unicode, what I put in preamble to write they direct in Xelatex?

If you're using xelatex, you should load fontspec that allows you to set the main font with \setmainfont{} and you can choose any font you have in your own OS. This should be the font of the main part of your document. If you're writing primarily using the Latin alphabet, then you should choose an appropriate font.

As far as the languages are concerned, I'd advise using polyglossia, it might be hard to use at first, but it does its job.

Here's an example with Hindi, Greek and Hebrew (all examples are Lorem Ipsum). Note that you have two ways of doing this:

I suppose that if you had a font that supported all the glyphs in your document, this might not be necessary but, it's not likely. Especially if you font proper fonts for your foreign scripts. 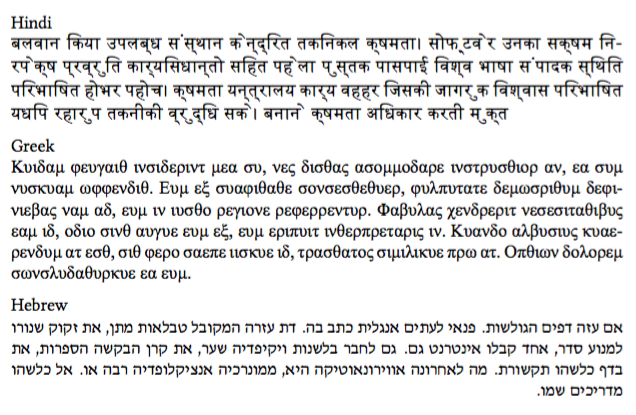 There are several parts to your question.

How to use XeLaTeX ?

In order to compile a unicode document using XeLaTeX, you first need to write a unicode document. So you will have to make it an UTF-8 document. Once this is done, it is very easy. You write your document as if you were using PDFLatex, but instead, you will compile it using xelatex.exe. As for writing characters in different languages, then you just need to write them normally in your utf-8 document, and XeLaTeX should handle them as if they were normal characters.

Using utf-8 is not something you a are usually paying direct attention to, so most people don't really understand what it is. To understand it, you need to remember that when you write a file, would it be a .tex, .txt or a .exe, you are really just writing a series of binary numbers. UTF-8, as well as ANSI, and a few other ones, are the names of a few of the different "tables" we use to associate a binary number and a character.

The thing is, some encodings (that's what they are called) can choose to have some characters that others do not. The whole point of UTF-8 (and thus XeLaTeX and LuaLaTeX that are designed to work with it) is to be able to encode the whole range of the Unicode standard.

To use utf-8 in a file, you need an editor that is able (and configured to) work with this encoding. As for LaTeX IDEs, Texmaker does. In a more general sense, notepad++ allows you to convert between different encodings, and thus can be beneficial.

Once you made sure you use utf-8 encoding, you don't need to use any specific package to tell that to XeLaTeX, since it already knows how to use it.

Once you write in utf-8, the languages you can access are the whole range of the utf-8 (and therefore unicode) supported languages. So in theory, almost anything. Now, the real issue is to have a font that will contain those characters, so you may want to choose the font you use carefully, and have a look at how to switch fonts. But other than that ... the sky is your limit !

Not the answer you're looking for? Browse other questions tagged xetex unicode or ask your own question.