Why do the subscript numbers look misaligned?

I have the feeling that $\mathbb{Z}_{31}$, once compiled, look strange. It seems that the digit 1 is just slightly above the digit 3, or the other way around: the curly lower part of the digit 3 is slightly below the bottom of the digit 1. Is this the expected look from a typographical point of view?

I certainly dislike how it looks, but the picture below is a screenshot from a pdf, so it might be due to a rendering error.

However, the following small example shows the same output:

Staring this picture above for a while reveals that even the bottom part of the subscript 41 looks misaligned, that is, the digit 1 is slightly higher than the digit 4. Are these subscripts of different hight? Is there something wrong here, or is this just an optical illusion?

Note: this might have nothing to do with the \mathbb{} command.

There is nothing wrong. When a glyph forms a curve at the top or bottom, it usually overshoots it; similarly, some overshoot is allowed at diagonal junctions. Without this overshoot, combinations such as

would appear not aligned, due to how the eye perceives shapes. This has been used for centuries. Here's the relevant part from cmr10.mf:

This says the maximum overshoot is 0.22222pt; here's a visual proof, where A and S are rescaled not to have the overshoot.

where, unfortunately, snapping to the raster gives a false impression for the S. But the A clearly appears too low in the second line. 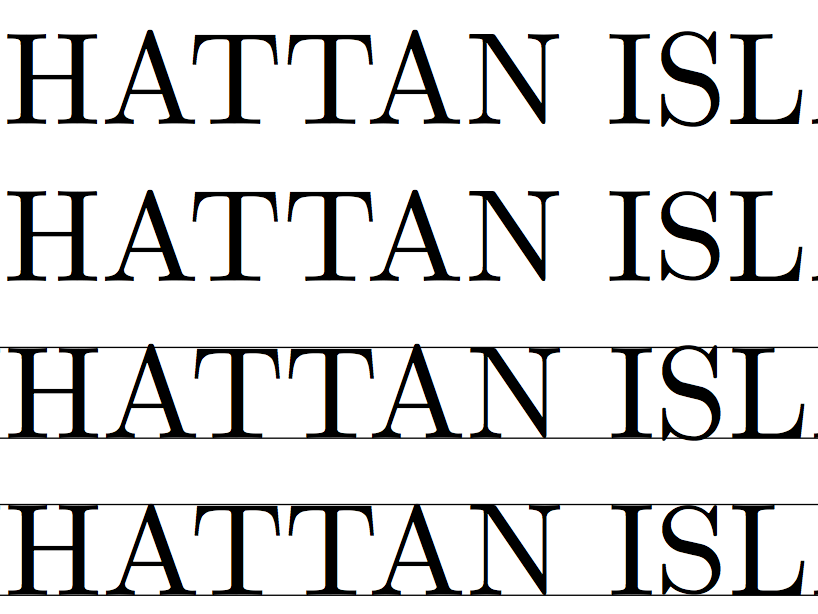 Maybe the effect is not striking for the A, but it certainly is for S. The amount of overshooting is a font designer's decision. Some fonts have large overshoots, others prefer the contrary.

In any case, you shouldn't be staring at a high resolution picture from a short distance: make a printout and hang it to the wall, which emulates reading a 10pt font.

Not the answer you're looking for? Browse other questions tagged vertical-alignment typography subscripts or ask your own question.

13
How do diacritical marks impact centering and overshooting?