Was anything in Satoshi Nakamoto's original Bitcoin paper compiled in LaTeX? [closed]

This question is about Satoshi Nakamoto's original Bitcoin paper, which can be found at:

In an attempt to somewhat date this paper, every source I could find claims that the availability of the paper was first announced by Satoshi on Cryptography Mailing List, on 1 November 2008. At that time, the paper was available via the cited bitcoin.org/bitcoin.pdf address, and the domain bitcoin.org had been registered on 18 August 2008.

Some metadata of the paper

When you open the PDF (I used the archived one) with Adobe Acrobat (I used version 15.010.20060), among the revealed metadata in the Document Properties-panel are the following:

I don't know whether this is also inherent metadata, or whether this has got to do with my own settings (especially, because it is under a heading entitled "Reading Options"), but the following is also shown in the Document Properties-panel:

Additional metadata &/or encoding info can be found when opening in a text editor (I used Textmate, version 2.0-beta.8.5), using e.g. the option Encoding: Western — ISO Latin 1 (which I chose).

For example, the document begins with:

and (skipped 1 line, which I couldn't decode properly using Western — ISO Latin 1) then:

and (skipped about 20 lines of text which I couldn't decode properly) then:

Such streams and endstreams; and objs and endobjs continue throughout the document.

For brevity: for further information regarding encoding, please open the document in a text editor yourself.

Note: Doing so, also reveals that /Lang(en-GB) is indeed present in the original document (and is thus not merely dependent on the settings of the PDF reading application of the reader, as I had suggested above).

Creation of the paper (LaTeX or not?)

Since the identity of Satoshi Nakamoto is a question mark, I have become interested to understand how that paper has been created.

Some people, as did I, intuitively thought that the paper was compiled in LaTeX.

The layout (I.e. margins, font, etc) are the default stylesheet for LaTeX. Pretty standard for any academic working in math, physics, or compsci.

Throughout the paper, double quotes are mismatched (I.e. author typed " and " instead of `` and ''). This suggests that the author was not good at using latex.

However, other persons criticize the hypothesis of the creation of the paper in LaTeX.

"It is not Latex, it is an imitation of Latex.

converted to PDF after originally written in Writer"

"[...] it was not typeset with TeX; you can tell this by the poor typographic detail (for example, contrast how the letters 'fi' are typeset, and the spacing in the equations). Not to mention the pdf metadata."

More specifically I would like to pose the following 4 questions (of which the last one is perhaps the most normal):

It's possible to think about more questions regarding the PDF metadata (such as: is it possible to discover which language-version of OpenOffice was used), but they would be not LaTeX-questions and therefor off-topic, so no need to answer them.

All of the following pictures, I have obtained by first opening each necessary page of the original paper, imported in Inkscape 0.91, while the check box "Replace PDF fonts by closest-named installed fonts" was unchecked. Subsequently, by clicking on images or formulas and then exporting them as PNG's. 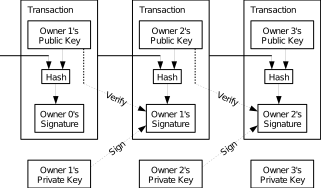 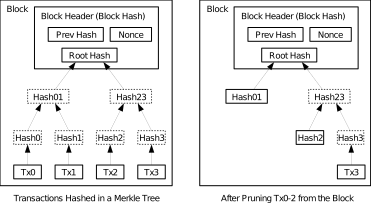 Note: The Chinese characters were not originally present (cf. the original Bitcoin paper, or Screenshots (formulas) below), but replaced mathematical characters through the Inkscape import-progress.

The following are screenshots of the formulas, as facsimile present in the original paper:

It may be important (if Satoshi Nakamoto indeed wrote; and compiled or exported; that original Bitcoin paper) to note that Satoshi claimed not to know "how to do SVG", or in other words: he had no experience in creating SVG images.

The thread might also be useful to learn about other knowledge of image editing/creation that Satoshi had.

Browse other questions tagged packages diagrams metadata or ask your own question.

8
PDF Metadata - Macro to extract (typeset) 'plain text' from a command?
5
show metadata into the pdf
17
Remove metadata of pdf generated by LaTeX
4
hyperref’s pdfusetitle option fails with authblk
2
Case change of UTF-8 characters breaks them in PDF metadata
3
Can xmpincl work with unicode text? If not, what other options are there?
0
Set language metadata for Adobe
0
Empty metadata on pdf obtained from compilation
1
no xml metadata stream with xetex