What can interfere with glossaries to prevent printing?

I have the strange experience that from the combination

only the debug message is printed, the glossaries not.

Even, the \printglossary leads to hanging. At the same time, in the text commands like \gls{} work as expected. Any advice, what other package can interfere with glossaries? (It is part of a bigger project, the MWE works as expected.)

I changed to command line version from TeXstudio. I receive the output

What I do not understand, that if there are entries accepted, and sorted, why do I receive the warning about empty .glo file? And also, why the pdflatex hangs if I try to continue with using pdflatex again?

I realise that you've managed to create a MWE and posted that as a separate question, but I thought it might help to answer your question "What can interfere with glossaries to prevent printing?" in a more general way that might be useful to others.

Although makeglossaries parses makeindex/xindy warning and error messages, makeglossariesgui additionally analyses the LaTeX messages in the .log file and can pick up problems that makeglossaries doesn't detect. There are some examples below.

Let's suppose I have a file called test.tex:

If I do the usual

then makeglossaries issues the warning you observed:

This is a warning rather than an error in this case, but it may mask something more problematic (as in Example 3, below).

With makeglossariesgui, if I load test.aux I get the error message:

No entries were found for glossaries 'main' 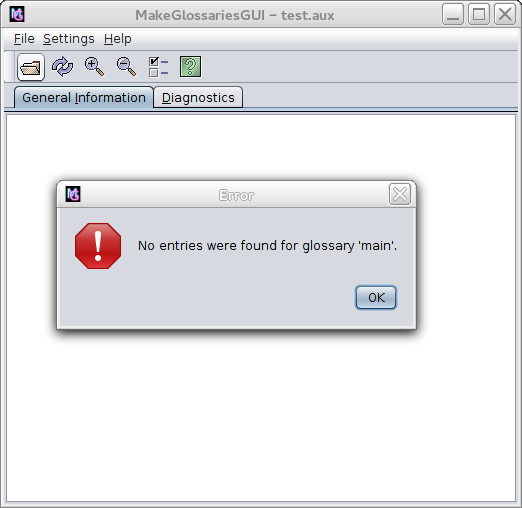 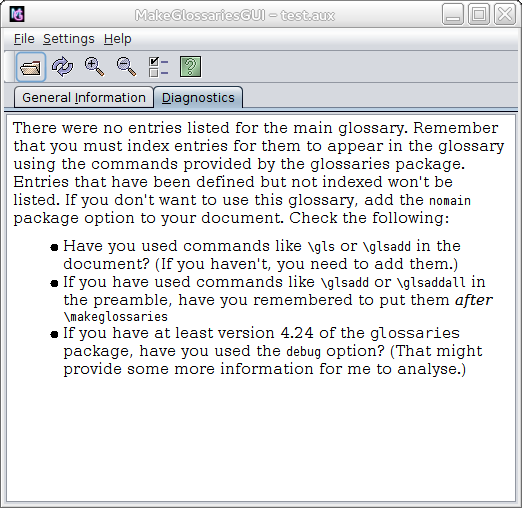 There were no entries listed for the main glossary. Remember that you must index entries for them to appear in the glossary using the commands provided by the glossaries package. Entries that have been defined but not indexed won't be listed. If you don't want to use this glossary, add the nomain package option to your document. Check the following:

If I switch to the "General Information" tab, I can see that my document has defined two glossaries: main and acronym, but there are no entries in the main glossary: 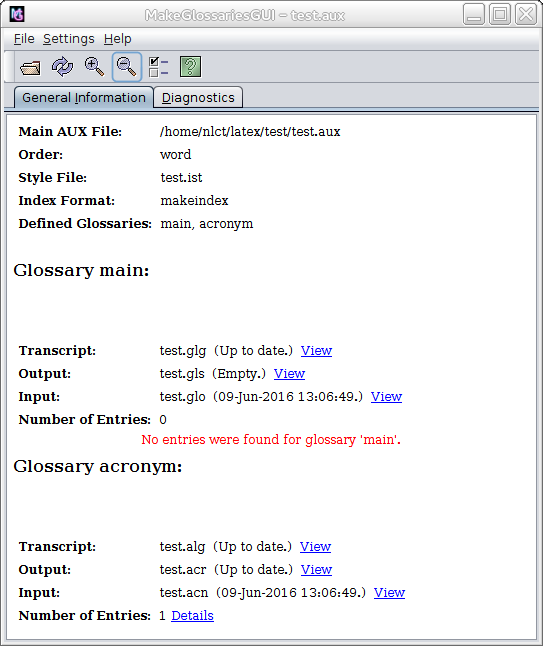 This is why the test.glo file is empty and is the reason for the warning produced by makeglossaries. The main glossary is created by default, but my document hasn't defined or used any entries in that glossary. If I don't require the main glossary, then I need to follow the recommendation and use the nomain package option:

This problem is more subtle:

In this case, if I do

then makeglossaries doesn't make any complaint, but the test.pdf file doesn't contain the glossary. makeindex is quite happy with the test.glo file and generates the test.gls file without a problem. If I switch to glossaries-extra, I get an error message, but with just the base glossaries package the message in the .log file is rather cryptic. However, makeglossariesgui can detect the problem: 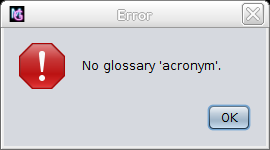 This is another instance where glossaries doesn't generate an error message:

In this case makeglossaries doesn't provide much help:

I'm getting the same error message as in my first example, but I've used \glsaddall so what's the problem? The answer is in the check list shown in makeglossariesgui's diagnostic panel, which is the same as earlier, but the pertinent item here is:

If I add the debug package option:

I get some more information:

It seems you have tried to index an entry in the main glossary on line 10, but the associated file hasn't been opened. Remember to use \makeglossaries before commands like \glsadd and \glsaddall. Details of lost indexing code:

So the problem is that I've put \makeglossaries in the wrong place. It needs to go before \glsaddall. (This is similar to \index and \makeindex.) The glossaries package doesn't complain about using \glsaddall before \makeglossaries as it's perfectly reasonable to comment out \makeglossaries if you're working on a draft and don't want the overhead of repeatedly rebuilding the glossary whilst you're editing a complicated section of the document.

So the answer to "What can interfere with glossaries to prevent printing?" is: potentially a lot of things, but makeglossariesgui might be able to diagnose the cause.

I just spent a better part of a day answering the same question. Unfortunately all the good information here did not help me.

My issue was with specifically:

which was in my initial source code to give examples... it prevented any calls to \printglossaries. Not sure what causes the issue. But I had the exact same symptoms you had, I could reference \gls{foo} and it would print "Foo" in the text, which is how I defined it, so I knew that was working... but the print statement was giving me nothing until I commented out that line above.

Hope that helps anyone else that has this same issue!

Not the answer you're looking for? Browse other questions tagged glossaries printing or ask your own question.

1
Glossaries not printing to yet an other latex newb
32
Best solution for acronyms, abbreviations, glossary and index
10
List of Acronyms is not displayed
3
\printnoidxglossaries vs \printglossaries
3
Categorize Acronyms based on type
1
Glossaries and \libertineGlyph and \makebox
2
Paragraph style glossaries acronym list
2
Glossary just partially filled
2
Acronyms not written out in a list when using glossaries and memoir
1
Acronyms list in TexStudio
See more linked questions