how to show list of figures and list of tables inside chapters only and not also at top of document?

This is a follow up question from setting-tocdepth-to-zero-in-report-class-makes-minilot-and-minilof-not-show-up but I have new problem now and it is really a new question but related.

I have a main document that reads number of chapters from different locations. I am using minitoc to show a toc in each chapter, and also show list of figures and list of table in each chapter.

But I do not want to also duplicate this and show the list of figures and list of tables in the main TOC for the document, since it will clutter the main TOC.

If I need to see list of figures for a chapter, I can always go to the chapter to see them, since each chapter is independent from the other, this seems to make more sense.

But to be able to show LOF and LOT in each chapter I am forced to issue the commands \listoffigures and \listoftables in the main document so that minitoc can read the lists.

Is there a way to compile the list of figures and tables, to make minitoc do its job, but not show them at the main toc?

MWE (showing just case for tables, but the same for figures also)

Above, but that did not work.

Question is: How to show lof and lot in chapters only but not in main TOC?

The \tableofcontents or \listof... macros use \@starttoc{X} where X is the extension of the relevant ToC file, i.e. toc or lot.

However, \@starttoc uses an \@input to read the content of the relevant file and typesets this list of ... then.

This could either be patched out or using a 'copy' of the \@starttoc command which is used in \listoftables and \listoffigures then (after a redefinition).

Since the List of -- heading is most likely not wanted, I used a very primitive definition of \listoftables here. 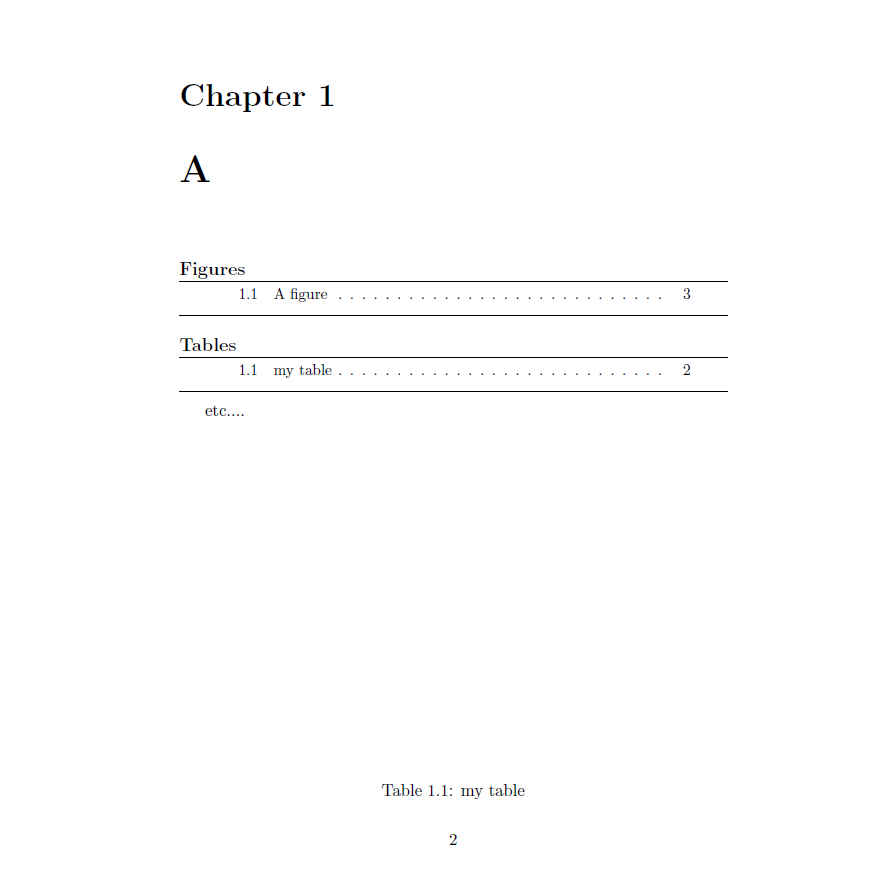 2
setting tocdepth to zero in report class makes minilot and minilof not show up
1
tex4ht gives an error for code it is NOT supposed to look at! `\spacefactor' in vertical mode error

5
How to generate table of contents for each section that includes all its subsections
2
How to show starred subsections in minitoc and not in toc
7
Problem with automatic Chapters/Parts in List of Figures and List of Tables
6
list of figures and tables when there are no figures or tables?
0
How do I exclude some subsections in section, while other subsections within the same chapter not?
2
minilot and minilof with tex4ht
0
LOF and LOT in two columns with different Names in TOC, in headmark an on Page
0
list of tables and list of figures for each chapter
0
Set list of tables and list of figures as section in table of contents