Why exactly is \linespread{1.05} appropriate for Palatino?

[I]f you only want to use fonts other than Computer Modern you may use \linespread{<factor>}. For example, when using Palatino \linespread{1.05} would be appropriate.

A factor of 1.05 for Palatino is also recommended in, e.g., this posting at comp.text.tex and (by implication) in section 2.1 Fundamentals of Page Layout of the KOMA-Script manual.

A possible reasoning is that the increased \linespread compensates for Palatino's larger x-height (height of lowercase letters without ascenders) and hereby avoids "cramped" text lines.

Palatino's x-height is about 9% larger than that of Computer Modern (4.69pt v. 4.31pt for a fontsize of 10pt, see MWE below). That is, the "recommended" Palatino \linespread factor of +5% is about half as large as the difference in x-height.

Some preliminary remarks. I think we can all agree that there can be no universally agreed-upon optimal amount of "typographic color" or "overall grayness" of a page of text. What some might consider to be "good color" may strike others as unpleasantly light, or too dark. Nevertheless, for the sake of the argument, let's assume that (i) there is an optimal amount of color and (ii) the settings for 10pt Computer Modern set "single-spaced" achieve this optimal amount. (By the way, this does not imply that the optimal distance between consecutive lines is 10pt for text set in CM. The topic of what exactly constitutes "single-spacing" is a matter for a different discussion.)

The question then becomes: how does one achieve this amount of color when switching to a different (text) font, such as Palatino? Palatino and CM obviously differ in many respects. Not only are their x-heights different, but so are their cap-heights and ascender heights as well as the average stroke width (to name just a couple of additional factors). The upshot is that if text that consists of a group of paragraphs is set both in Palatino and in CM with the same nominal point size (say, 10pt) and the same interline distance (say, 12pt), the paragraphs and pages set in Palatino will look noticeably darker. I think most will agree that the Palatino paragraphs will be "too dark" -- again, assuming that the text set in CM have "correct color".

Regarding your first question: I have no idea who was the first to come up with this recommendation. Most likely, though, the need to increase the "leading" when typesetting text in Palatino was "discovered" immediately after people started mixing/matching Palatino and CM.

The +5% recommendation you noted in the l2tabu document can be nothing more than a rule of thumb. My understanding is that it should be understood as a "lower bound" on the required line spread adjustment, rather than as a single number. The code below generates two half-pages of text; the upper half is in Latin Modern, the lower is in Palatino nova with a linespread factor of 1.05. (Both texts are set with nominal font sizes of 10pt, and the text itself is the usual lipsum stuff...) To my eyes at least, the text set in Palatino still has more color than the CM reference text despite the 5% adjustment. Playing with the line spacing setting, I'd say that ca. 7% achieves equal color. 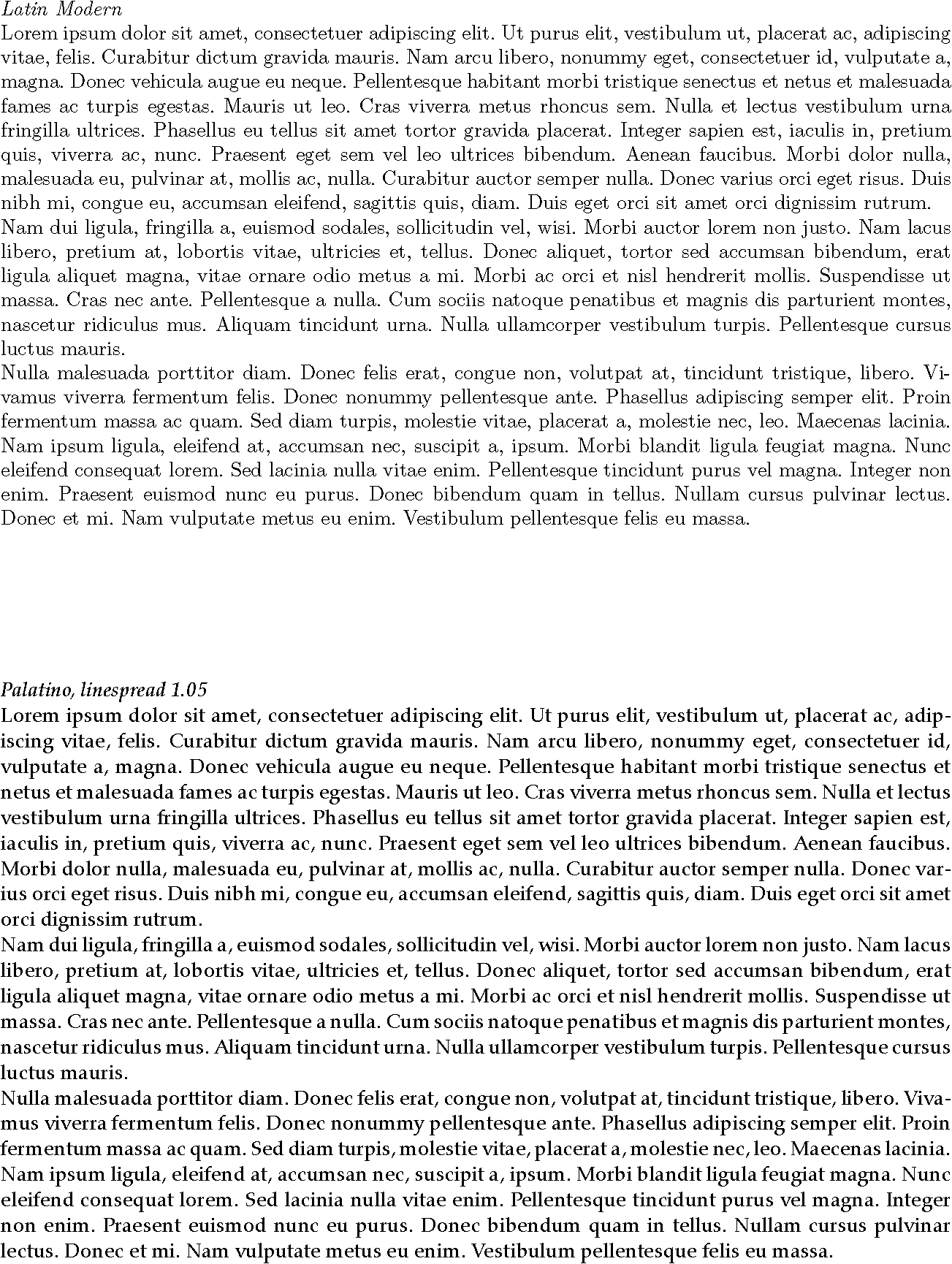 The 1.05 probably comes from whoever made the first package for using Palatino with LaTeX (the now obsolete palatino package), i.e. Walter Schmidt.

I wasn't able to locate a version of palatino.sty that contains \linespread{1.05}, but Walter Schmidt indeed suggested this factor in a posting at de.comp.text.tex in March 2002. Here's my translation of the relevant parts:

The reasonable value depends on the width of the text line. \linespread{1.05} is a sound reference point. Try smaller and larger values, up to about 1.08, and you'll see what is best for readability.

\linespread{1.05} for Palatino is also recommended in the German version of lshort, co-authored by Walter Schmidt (but not in the adapted English version).

Not the answer you're looking for? Browse other questions tagged fonts typography line-spacing mathpazo or ask your own question.

19
Source of “correct” baselinestretch values for various fonts?
5
What are the generally accepted guidelines for adjusting \linespread to avoid extra spreading from inline math?
2
Default baselineskip for corresponding font size
2
Having 1.5 linespacing except for the title page
2
Setting the right linespread for kpfonts