Kerning between bold and non-bold text

I'd like to write a word in bold followed by a comma and a non-bold word, like this:

If I just write why, TeX inserts a kern to shift the comma a little closer to the "y". But when I write {why}, (even without the \textbf), TeX doesn't insert the kern; apparently kerning doesn't happen across a group boundary. If I write {why,} then I get the kern, but I also get a bold comma.

If you want to add a kerning based on the "outer" font, you can define

will add the kerning and the comma (also ignoring the italic correction). The usual meaning of \nocorrlist is ,.; with the first line we add \? to the list without the need to know the current meaning.

A different approach (the hint was in Wyzard's comment) is to define a new command:

that possibly applies the kerning only if the character following \highlight{word} is a space.

Since now I've cooked up a potential solution, I'll requote Bringhurst from my comment:

"When boldface is used to emphasize words, it is usually best to leave the punctuation in the background, which is to say, in the basic text font. It is the words, not the punctuation that merit emphasis ..."

So if you follow this, then your problem persists. Here's a solution using the xspace package. As egreg notes in the comments, each character requires a different kern, so the solution below is a compromise. As you can see from the comparisons below, you don't gain much by doing this, but if you make the kern bigger (to make the 'y,' or 'w,' case look nice) the comma will appear too close to most of the other characters.

As an actual solution to the problem, I would probably insert a manual kern in the few cases where this arises in your document. (Not to mention that the vast majority of people won't notice it.) 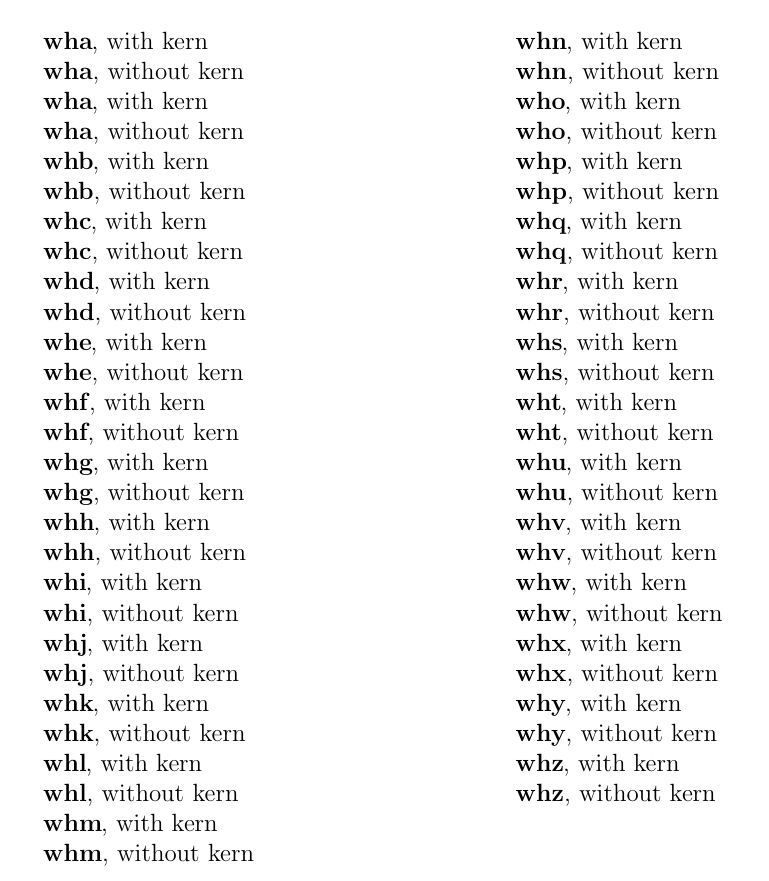 In answer to your second question, here's an extract from the Chicago Manual of Style (CMS) regarding the shape of punctuation (italics or bold) following text that has that particular shape:

All punctuation marks should appear in the same font--roman or italic--as the main or surrounding text, except for punctuation that belongs to a title in a different font (usually italics). So, for example, the word and, which in this sentence is in italics, is followed by a comma in roman type; the comma, strictly speaking, does not belong to and, which is italicized because it is a word used as a word [...]. Of course, it may be difficult to tell whether a comma is in italics or not (to say nothing of periods); for other marks it will be more evident. [...] In the first four examples that follow, the punctuation marks next to italic text belong with the surrounding sentence and are therefore presented in roman. In the last two examples, the two punctuation marks that belong with the italic titles--the exclamation mark following "Help" and the comma following "Eats"--are in italics (the comma following "Leaves" is in roman).

6.3 PUNCTUATION AND BOLDFACE OR COLOR

The choice of boldface (or, by extension, type in a different color), unlike that of italics (see 6.2), is more often an aesthetic than a purely logical decision. Punctuation marks following boldface or color should be dealt with case by case, depending on how the boldface is used. In the first example, the period following "line spacing" belongs with the boldface glossary term and is therefore set in bold; the period following "leading" is part of the surrounding sentence and is therefore not set in bold. In the middle two examples, the punctuation next to the boldface terms belongs with them, like the first period in the first example. In the final example, the question mark belongs to the surrounding sentence and not to the boldface word.

According to a more traditional system, periods, commas, colons, and semicolons should appear in the same font as the word, letter, character, or symbol immediately preceding them if different from that of the main or surrounding text. In the third and fourth examples in 6.2, the commas following a and b and the colon following the Malthus title would be italic, as would the comma following the book title (Eats, Shoots & Leaves) in the last example. A question mark or exclamation point, however, would appear in the same font as the immediately preceding word only if it belonged to that word, as in the title Help! in 6.2. This system, once preferred by Chicago and still preferred by some as more aesthetically pleasing, should be reserved--if it must be used--for publications destined for print only. In electronic publications, where typeface may be determined by content as well as appearance (e.g., a book title might be tagged as such, separate from any surrounding punctuation), the more logical system described in 6.2 should be preferred.

It seems like both are valid, at least according to CMS. I would opt for the CMS' preferred option in both cases (bold and italics). That is, to keep punctuation formatting separate from text typesetting.

In agreeance with this, Wikipedia's Manual of Style (MoS) also suggests separating the shape of the text and succeeding punctuation.

Not the answer you're looking for? Browse other questions tagged fonts bold grouping kerning or ask your own question.

7
Kerning between 'V' and '.'
9
Kerning between V and / in Palatino and Euler
7
Find optimal kerning for space between inline math and text
6
Difference between fixed-width and proportional typewriter fonts in listings?
6
Invisible text (\phantom) with kerning?
6
Kerning against word space in LuaTeX
1
Kerning between $\uptau$ and subscript?
4
Kerning between f and footnote mark
1
unicode-math + bold upright symbols + bold circumflex accent