Why does \detokenize # sometimes fail inside of environments?

When I use the pound sign/number sign/hash sign # inside of commands and environments, this refers to arguments. However, shouldn't \detokenize{#} make it NOT an argument?

Try uncommenting the second \detokenize to get an error.

This error only occurs when uncommenting the line containing BEGIN.

Since # has category code 6, it has a very special meaning in TeX, because it is used for denoting parameters in macro definitions.

The rules of TeX tell that when you want to store a # in the replacement text of a macro, you need to double it.

When processing the replacement text for a macro definition, a single # has to be followed by a digit (1 to 9), denoting a pointer to the corresponding argument, whereas ## will be stored as #. This is the trick that allows something like

so the replacement text of \foo is \def\baz#1{-#1-} and a call of \foo will define \baz as a single argument macro.

Note that when you do \meaning\foo (assuming the above definition), you will be presented with

and the same will happen with \detokenize that uses the same mechanism. Thus something like

will actually see two # in the replacement text, but the final result will be four of them. The standard mechanism when processing \edef will first half the number of # and then \detokenize will double them back. In particular, you can't produce this way an odd number of #.

If you want to produce delimiter lines, it's much better to use an indirect method, making in advance the required token list consisting of # with category code 12. In the example I use three of them, just because it's an odd number. 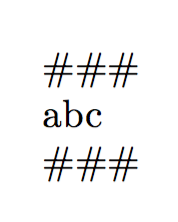 A different definition for \lineofhashsigns that doesn't require \lowercase is by changing the category code:

You can add whatever token in the replacement text, so long as you don't want the macro to have arguments.

The \detokenize primitive will indeed mean that # is not treated as a parameter, but one when expanded. Remember that in a normal assignment (\newcommand in LaTeX, \def as a TeX primitive) no expansion takes place. Here, \newenvironment is performing exactly the same 'just store' the tokens as \newcommand. This means that we have the usual TeX rule that on creation of a macro, we have to have the matching parameters for each # present or we have to have the # tokens doubled.

As \newenvironment ultimately resolves to a \def, we can do what you want using \edef:

Not the answer you're looking for? Browse other questions tagged parameters token-lists detokenize or ask your own question.

2
Keeping underscores in parameters even inside NewEnviron environments
7
How to typeset the percent symbol inside \detokenize?
3
Detokenize does not produce the expected underscores
14
Why does the TeX scanner process tokens for register numbers and macro names differently?
2
Why does \tl_if_in (and \clist_if_in) insert extra tokens with \mathrm
0
Reduce the length of underscore inside detokenize