is there an overview available for Arabic fonts in LaTeX / XeTeX? Ideally with output examples, so that it becomes clear how they compare. So far, I'm aware of Geeza Pro, Amiri (and its variants), Sheherazade, Al Nile, but I assume there is much more out there.

Thank you for any helpful links!

In texmf-dist/doc/latex/arabi/user_guide.pdf, pages 50–51 give samples of fonts from Microsoft and from arabeyes.org (there are .ttf versions of the latter in Debian’s fonts-arabeyes package). And the documentation for dad shows examples of its output. Of course, with xetex and luatex, you can use any unicode, OpenType font, whether free or commercial. Here are some free fonts: 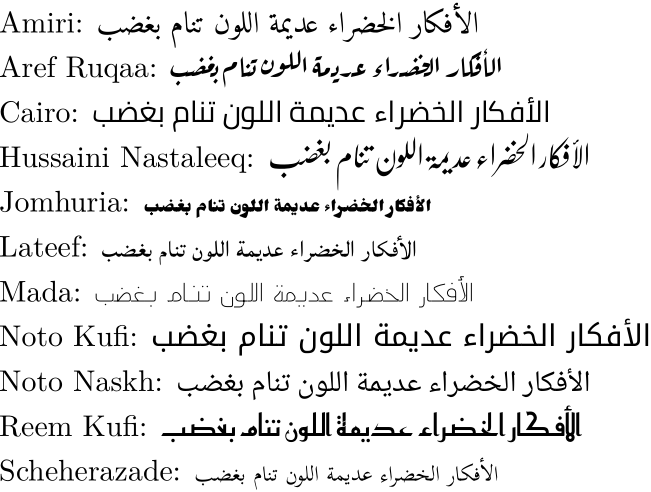 You can get a list of Arabic fonts available on your computer by typing fc-list :lang=ar on the command line, and you can search for all Arabic Google fonts.

Update: Here’s the brand new FiraGO, an extension of Fira Sans which adds support for Arabic, Devanagari, Georgian, Hebrew, and Thai to the already impressive range of Fira Sans:

and its stylistic alternate:

In the Modern Toolchain

Khaled Hosny, the designer of Amiri, also created the Libertinus font family (based on free fonts by Philipp H. Poll), which make excellent companion fonts to Amiri—and, particularly relevant to LaTeX, include an OpenType math font, Libertinus Math. Hosny also made XITS Math, converted and extended the STIX fonts. Libertinus and XITS have the best support for Arabic and Persian mathematics of any free font, as well as other features most other math fonts lack, including support for \boldmath. (Dr. Hosny also collaborated on one other OpenType math font, Neo Euler, but it has none of these features and is incomplete.)

There are some Arabic fonts for legacy packages, which you might still need to compile an old document, and I’ve occasionally still seen in use. Conventional seven- and eight-bit encodings were never very suitable for Arabic, but the arabtex package defined the xnsh14 pseudo-font, and also supported an older nash14 pseudo-font, as well as bold variants. The original sources for these are in METAFONT. The farsitex package is similar.

The arabi package offers different local encodings for Arabic and Farsi. There is a table in the manual of the fonts it supports. Of these, the Arabeyes Project fonts were also available in a PostScript format.

There were never any other Arabic fonts made specifically for TeX, at least that are still available from CTAN.

DavislorDavislor
12.7k11 gold badge2323 silver badges4343 bronze badges
add a comment  |
-2
Want to improve this post? Provide detailed answers to this question, including citations and an explanation of why your answer is correct. Answers without enough detail may be edited or deleted.
share|improve this answer
edited Mar 7 '18 at 1:44

Not the answer you're looking for? Browse other questions tagged fonts xetex arabic or ask your own question.

13
How to install HarfTeX on TeXLive?
4
How to typeset (automatically) Qurʾānic verses?
2
Can't write in Arabic in Latex using “arabluatex” package