Spacing in integrals with LaTeX

I've been teaching myself a lot of calculus through online resources since I've been bored over summer break and will be taking AP Calculus I and AP Physics C next year. When dealing with integrals, all of my readings and formula charts put a space in between the integrand and the differential. For example, a sheet of practice problems from Clark University:

and the Physics C formula sheet from CollegeBoard:

(Sorry for the novice questions; I'm still new to this.)

It's a good habit to have a thin space in front of “dx”, which emphasizes the fact that the “d” is attached to the variable “x”, forming a single unit (which is, mathematically, what really happens).

So a savvy typist will input your formula as

Typing in the \, becomes automatic, when you think about the nature of the symbol. But…

Yes, there's a caveat. Some people, not knowing what the “d” is about, think that it has the same mathematical nature as “sin” (which it hasn't, but here we're discussing opinions), so they want it to appear in upright font.1

In view of this it is convenient to add a macro for the “d” in the differential symbols; the simplest one is

so you type the formulas above as

and, in case the journal editor, your supervisor or whoever asks you to turn the “d” into upright type, all you'll have to do is to change one line in your typescript

Some packages offer similar functionality; I usually find they overdo. For instance the physics package defines \dd with three optional arguments, making for confusion rather than simplification. (The commath package, instead, makes such a mess that it is better ignoring it.)

In any case, resist the temptation to do

in order to have a handier macro name for the differential. Macros for accents should never be redefined to do something different. Accents appear (maybe masked out) in people's names and having the differential symbol popping out in the middle of a name in the bibliography is not the best thing to find out when you're very near a deadline.

1 Even worse, some people even go further and use Wolfram's convention that the “d” is double-struck: 𝕕 (they also like 𝕖 for Euler's number). Let's hope this ugliness won't spread.

I use this, borrowed from an answer on this side, but I can't remember as an answer to which question: 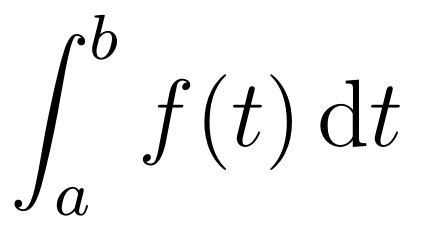 Not the answer you're looking for? Browse other questions tagged formatting or ask your own question.