Following is the code that was posted for my question How to show path gains in block diagrams drawn in tikz environment?

It is giving me the desired output. But my problem is that I don't understand the set of statements in the preamble. I want to understand how each of them is used so that I can define my own tikzset for my future works. Can someone help me in understanding these. I will be grateful. 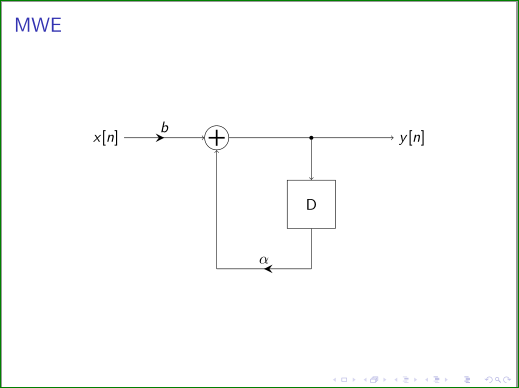 For above picture I didn't bother with line thickness. This you can easy change.

Basic explanation of meaning some commands/macros used in my answer I already add to the answer, so here I more or less repeat them.

In graph are used predefined shapes of nodes. For its definition is used `\tikzset{ ...}, but they also can be defined locally as

To \tikzset also can be given name, for example `\tikzset{mygraphs/.style = {< styles definitions>}} and than use in particular TikZ picture:

By styles are predefined graph elements as dot, gain, summation and delay. Most of definition is straightforward, some of them are more complex. At all nodes, which have fixed content, this content is written already in node style definition. For this is exploited option node content={...}. Use of this nodes is:

More complex is adding to the node shape some drawings. For this are for coordinates used bounding box anchors. They are defined as

For shorter writing those coordinates is defined new command

Added drawings should be in path picture={...} as can be seen in the code.

Follows copy of explanations already given in my answer to your question before.

Hopefully, some one will give better explanation. On the end, when I do not know how to solve some particular problem in drawing with (nice, powerful and complex) TikZ package, I read its manual agan and again ... . If this not help me, I ask here (TeX. SE) for help :-). Here around are a lot of TikZ gurus! On the web you also can find some short introductions to the TikZ.

From code you also can observe a way, how you can draw similar graph with prepared system of shapes.

Addendum: In cases, when function blocks have different text inside shape, than you have two possibilities to define their styles:

In this case, when the node content is "D", use this style as

and when content is different (not default) for example as:

Not the answer you're looking for? Browse other questions tagged tikz-pgf tikz-styles or ask your own question.

2
How to show path gains in block diagrams drawn in tikz environment?

4
UML Statediagram
17
How to define the default vertical distance between nodes?
16
Numerical conditional within tikz keys?
15
TikZ: Drawing an arc from an intersection to an intersection
12
Drawing rectilinear curves in Tikz, aka an Etch-a-Sketch drawing
9
Line up nested tikz enviroments or how to get rid of them
6
Problems with nested TikZpictures
0
LaTeX Tikz: Compare two \def arguments