Mdframed for theorems: how to make fonts similar to amsthm and change title format?

I am making a custom book style for my thesis, and I came up with a style for the theorem environments that I like, as you can see in the image below. However I have two problems:

I know that these issues can be solved by using the package thmtools, however I could not find a way to reproduce this style and colors, in particular I could not make the title to appear in this shaded bar, and I also had issues with shaded theorems not braking along pages, wich is a must for me, as I am going to have some long ones.

Could somebody tell me how I can produce the same result, but with my two issues solved?

Extra question: I learnt from experience that when I'm having a hard time changing latex styles, there is a good reason for that, and changes produce worse results. I guess it's a matter of taste, but from a typesetting point of view, is there a good reason to avoid doing the changes I'm asking here? 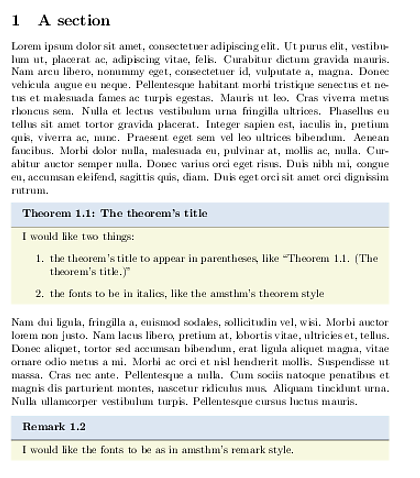 Tcolorbox did the job with the following:

Not the answer you're looking for? Browse other questions tagged fonts theorems mdframed or ask your own question.