This question tries to expand upon the another both of which aim at providing a "Best" practices for tikz-pics or atleast a couple of how to examples clarifying some of the more advanced trickery that one may employ.

It typically makes sense to have a set of base dimensions for a pic. Allowing the user to alter these dimensions enables them to customize the pic in some small way. This is useful under various circumstances. TikZ collects the options for a pic into the pic actions for commands reading \draw pic[PIC ACTIONS] {...}. It would seem sensible to allow options specified within pic actions to be passed through to a branch in the pgf tree, pick of any relevant keys and pass the remaining keys back up the tree to some other family that knows how to process them.

This questions takes the cleaner code from @LoopSpace, strips away the calligraphy code to focus upon handling pic actions. I have tried four methods in the code which basically try to pass the keys into the correct branch and if they re not present pass them up the tree. Mostly I'm trying this against the .search also handler.

How does one pass the pic actions to some underlying style such that parts of that style may be set and that style options not covered by that style get passed back up to the /tikz and /pgf branches.

The simplest mechanism for this might be the use of the .search also handlers, but my atempts with this seem to fail. Perhaps it is more complex and one really requires key filtering.

This question implies that pic actions are limited in some way. @Qrrbrbirlbel provides some alternate strategies but I haven't succeeded with any of them.

It is a bit misleading to say pic actions are limited. Of course, they are limited, just like everything else. A hammer is limited: it can't boil water.

I think the problem is that you are trying to make them do something they are not designed for and, possibly, trying to use pics for something they weren't designed for. pics are easy to create but, as is usually the case, that convenience has a cost in terms of power and flexibility. You can have the power and flexibility without the convenience, of course, by not using a pic.

This is not the way I usually configure pics because I didn't want to overwrite your configuration simply because I tend to do things differently. But I think the key is that the easiest way to set options flexibly is to pass them as an argument to the particular pic rather than passing them as options to the pic path. 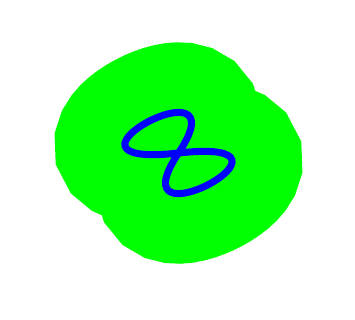 This answer is meant as a compliment to @cfr's one.

While playing with the code from @cfr code I stumbled upon an alternate way of implementing the same mechanism that he/she provided posted here. Execution wise it does not appear to add but it cleans up the code a little.

The initial part reads the same and simply sets up the dimensions.

Then we adapt @cfr's code as follows, based upon the other answer. It seems common practice to provide an every KEY and a corresponding KEY that sets it. Supposedly this is done every where within tikz but I haven't confirmed this.

The use of #1 enables the \draw pic {infinity={...}}; call signature, removing it causes tikz to simply ignore the input. That is one is enforcing the use of \draw pic[infinity={...}] {infinity}; instead. The latter syntax passes the options to every infinity/.style via infinity/.syle, providing an interface similar to @cfr's code.

The last thing that might be of interest is that I pass pic actions to the base style, every infinity, but I do so before the path change. Similarly one might remove it from the base style placing it into the call to draw instead as in \draw[pic actions, every infinity] .... The effect is the same either way, the latter being slightly more 'hard coded'. There is a caveat though if pic actions is placed after the path change as in every infinity={infinity dimensions/.cd, pic actions} or as \draw[every infinity, pica actions] then one must enable the line infinity dimensions/.serach also={/tikz, /pgf} otherwise you will get error messages indicating that the key is unrecognised.

14
Key that takes a list of other keys as argument and sets them
8
How do you pass unknown keys as options to a TikZ picture?
5
Parametric Pics : Variations of Infinity
2
Nested pics in TikZ 3.0

3
Unsetting a PGF/TikZ key
5
TikZ: using a bitmaps's dimensions as global bounding box
18
TikZ: Drawing an arc from an intersection to an intersection
5
tikz shapes, not quite getting things right (anchors and keys)
5
Parametric Pics : Variations of Infinity
2
Parametric Pics : Sans infinity
2
Plotting a Brownian motion with dashed line indicating the values
3
Document header with tikz