I've tried to use MakeIndex with the spanish package babel. I want to add to the index some words witch are written in the Introduccion, that is numbered with roman numbers in Small Caps. But in this situation MakeIndex rejects these words. I've read that it needs the numbers of the pages to be in lowercase, but it is an error in the Spanish language.

I've tried with es-preindex as an option in babel (as you can see here, page 4) but nothing changes.

Does anybody know how to get the words in the index and the roman numbers in small caps? Thanks in advance. 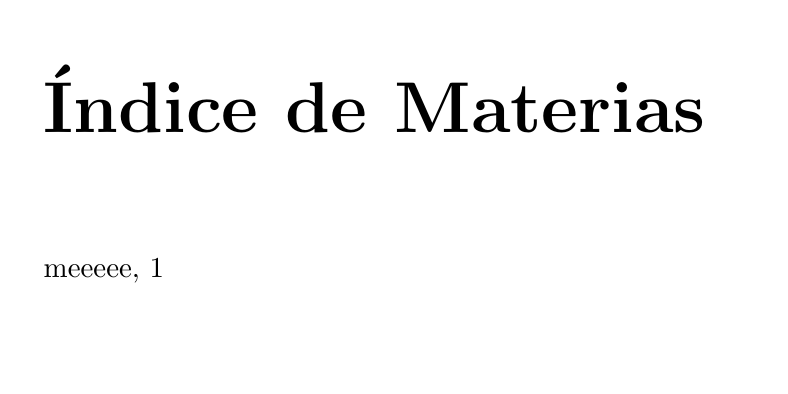 By adding "es-preindex" in the babel package, the result is exactlly the same.

With the package option es-preindex the .idx is pre-processed to generate a new file with extension .eix, with the problematic entries fixed. The .eix is the file you must process with makeindex, not the .idx. If you are writing Spanish documents, you may want to have a look at esindex, too.

Not the answer you're looking for? Browse other questions tagged indexing small-caps roman-numerals spanish or ask your own question.

1
Makeindex and Hyperref in Spanish

4
Best way to index in spanish / xindy on windows? / makeidx and spanish accents
11
Lower-case roman numerals in enumerate with Spanish babel
15
Makeindex no .nls file
7
Is there a place for one more index processor?
2
small caps roman numbers for index entries with xindy and hyperref
1
Makeindex and Hyperref in Spanish
2
Spanish bibliography
7
Changing the definition of “\mod” in spanish impossible?