I have a very long align* with lots of \intertext. Some of the equations are really long, like this: 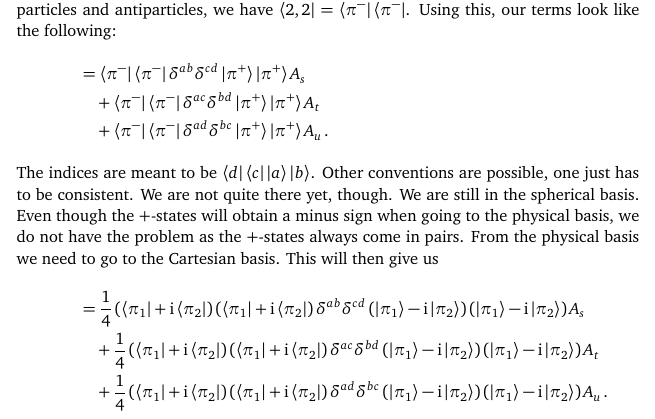 What is the most sensible way to typeset this? So far I have always used the following:

This seems to work, although I am not sure whether \quad is really the right measure to shift it.

Now I have tried to use some nested thing:

Only with {aligned}[t] I got it to look correct. Without the [t] the equal-sign would be in the middle. With a simple gathered the three lines would be centered, that looked really weird:

Is there a good way to do this?

just using the align or align* environment should give you what you want:

Is that the thing you are looking for?

My quick reading seems to show that the only thing that changes from line to line in these formulas is the partition of abcd and the subscript on A . Is there a way to rewrite the discussion to separate out the constant parts from the variable parts. That might both make the alignment problem go away and make the argument easier for your readers.

If you want to keep the equations whole I think you should consider making some of the outer parenthesis and bracket pairs larger.

I don't think the intertext is a problem - but you could solve it by naming the left hand side of these equations and repeating the short name. That wouldn't make the block of lines much wider.

Not the answer you're looking for? Browse other questions tagged equations align or ask your own question.