Xparse k argument to parse options at end of environment

I am trying to combine the solutions from

to parse optional parameters following the end of an environment. There are only three possible cases with these options:

The case of ^{subscript}_{superscript} is not required.

I would have thought that adding the optional parameters to the \@MatrixWithParen helper macro would have sufficed, but it seems that the options don't get to that macro.

The problem with \AfterEndEnvironment is that there's an extra \if@ignore\@ignorefalse\ignorespaces\fi bit of code after it. So the arguments k_k^ never reach their intended sub- and super-scripts. You can move around this with an extra argument u{\fi} (or, if you want to be more cautious, may be u{\if@ignore\@ignorefalse\ignorespaces\fi}, so it gives an error if that code is not present, I will use u{\fi} for simplicity). 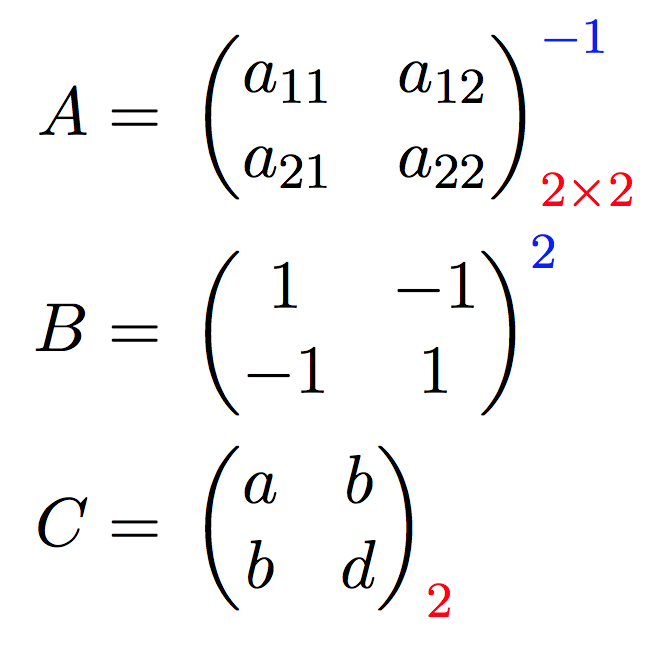 As a general suggestion, if you are not into looking at the definition or at the source (which might be a bit tedious, if you don't know where to look) you can define an auxiliar macro that would print into the document “what's there” and will let you easily check what might be wrong. For instance, if you define

the macro will grab everything until \qq, will put it back (so the code compiles) and will write all the code that it saw in \tt font in a new paragraph (remember to put the delimiting \qq —or whatever name you choose— outside math mode). Here are a few examples.

Imagine you used \AtEndEnvironment and it didn't work, a fast way to check why it doesn't work is

which will show “what's there” right away

It's fast and direct, you just now exactly what's going on there. Now if you use \AfterEndEnvironment

Which is what I have done, hence we need to grab those four tokens and I decided to go with u{\fi} to grab until \fi.

It's not granted that it would work, but many times it will give you a fast overview of what's happening. You can just try it in case something goes wrong, it will take a second and it might solve your problem.

It seems to cope correctly with nesting, too. This is abusing xparse, anyway.

One of the comments asks me to “elaborate on why this is ‘safer’”. Well, there is a general reason, and it is that this solution makes no particular assumption about the code contained in the \end macro, so it would continue to work even if the latter were to change; and this certainly qualifies as “being safer”, in the sense of “more robust”.

However, when I originally wrote that sentence I had a much more specific issue in mind, which—as I realized later—was based on a false premise; this issue was briefly discussed in a couple of comments to Manuel’s answer that I deleted when I became aware of my error (actually, after a grace period of 48 hours). I’ll see if there is a means to undelete them, thereby leaving them visible for reference.

Heaven knows why, I had assumed that the \AfterEndEnvironment command injected (a macro that expanded to) the code indicated in its second argument after the group implied by the environment being patched, by means of \aftergroup, which is not at all the case. (Few things are as treacherous as the assumptions you make semi-unconciously.) My idea was that, if it had been so, the mechanism devised by Manuel would have been thwarted if the \if@endpe switch had been set to true, as it is done, for example, by all environments based on either \list or \trivlist. “The solution—I said, more or less, in a comment—works well for the case presented in the question, but could prove inadequate in general, for example when applied to ‘list-making’ environments”.

Let us explain briefly the issue. The \if@endpe switch is part of the little hack by means of which the paragraph indentation is suppressed if a paragraph follows immediately an \end{environment} declaration, with no intervening blank lines. So, for instance, if you say

then “Text after” is not indented, as it had been preceded by \noindent. The code that implements the \end macro, that is

looks at this switch and, if it is true, execute the \@doendpe macro, which takes care of setting and resetting the definition of \par and of \everypar in such a way that the desired effect is achieved. (I will not supply further details here: look at the definition of the \@endparenv macro in ltlists.dtx if you are curious.) Note, however, that it says \expandafter\endgroup\if@endpe, which means that the order of execution of the commands is as follows:

Thus we see that, if it were true that \AfterEndEnvironment used \aftergroup to accomplish its task, the \printmatrix macro used by Manuel would find the following tokens intervening before the two k-arguments:

You can see that the second case might be problematic…

All this can be confirmed by means of some simple experiments, of course not using \AfterEndEnvironment, but rather \aftergroup to insert a macro similar to the \qq test macro, that Manuel suggest in the second part of his answer, “after” (in the sense specified above) a certain environment.

Commenting or uncommenting the \@endpetrue command will exhibit, in the output, exactly the two outcomes described above.

The following source file shows what would happen if Manuel’s approach were used in conjunction with \aftergroup: this is precisely what I was thinking of when I qualified my solution as being “safer” than his.

The example compiles, but you get a warning about an incomplete conditional:

In this case, this does not hurt, but in general it could be a problem!

One final remark: Manuel’s solution works correctly with nesting, notwithstanding the use of \global definitions, because the order in which these definitions are executed happens to be (but not by chance!) the “right” one.

Not the answer you're looking for? Browse other questions tagged math-mode macros amsmath xparse optional-arguments or ask your own question.

1
Defining a \newcommand for environment in CircuiTikz
7
How can I capture both superscripts and subscripts after a macro
1
Variable number of arguments for \newcommand
9
Optional Parameters in xparse: \IfBooleanTF vs \IfNoValueTF
9
Patch 2016 xparse to support k-type argument
2
Nested xparse Macros
4
Define macro that scans ahead for super- and/or subscript, "absorbs" them and moves their argument
5
How can this complex command be broken down and explained for someone starting with Tex?
4
How to pass optional empty arguments in a newcommand down to another command with optional empty arguments in LaTeX?