In Math mode, if I write ":", it will automatically insert spaces before and after the colon. For example, $s:type$ will be shown as "s : type". How can I remove these spaces?

Add a pair of brackets around the colon, and put type inside a \text command. Alternatively, you can use \colon which looks better, in my opinion: 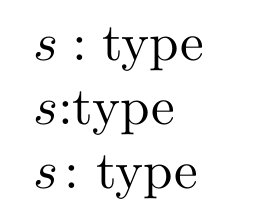 The colon : is declared by LaTeX as a binary relation, which means it is separated from ordinary symbols by a thick mathematical space.

You can make any character into another math atom by using an “atom declaration”: thus \mathbin{:} would make the colon into a binary operation symbol (spaced like +); with \mathord{:} you get an “ordinary atom”, like a letter. Also \text{...} makes an ordinary atom so

is what you probably want. However, \mathord{:} can be abbreviated into {:}, because TeX treats as an ordinary symbol any subformula inserted in a pair of braces (provided they don't delimit the argument to a command).

Beware, though that \text{type} might produce the text in italics if the formula is inside the statement of a theorem. Better doing something like

in the preamble and type the formula as

(choose a better name than \foo).

If you are going to use this for other things, may be the best would be to make a macro