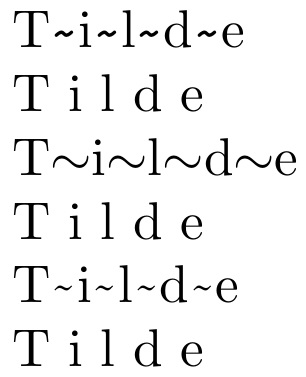 985
How does one insert a backslash or a tilde (~) into LaTeX?
184
Correctly typesetting a tilde
0
How can I insert the following WinBugs code into Latex as a text format?

30
Why is this n with tilde disappearing in a BibTeX reference?
2
Tikz: the use of \tilde is not working in the tikz environment
11
How come the tilde ~ sometimes does not behave like non-breaking space?
2
The correct way to type tilde?
2
Tilde do not cover all variable
6
redefine ~ only within the scope of a \newcommand
1
Big tilde over regular text, not in math mode?
0
Listings with color OR tilde, not both
0
How do I make the tilde encompass two variables?