Unblock your team by capturing collective knowledge that anyone can find.

“If there is one thing developers like less than writing documentation, it’s responding to unnecessary escalations […] and too many escalations wear down the developers.”

“We needed a better place to store all the questions and answers that people were repeatedly asking, and we discovered Stack Overflow for Teams.”

“We use Stack Overflow for Teams internally when onboarding new developers, and when new developers ask questions, everyone can benefit from the shared knowledge.”

how do I draw a self loop and also label graph edges in Tikz?

I have the following tikz code:

It has several problems.

1) the code won't compile because of the bottom drawing commands, what I am trying to do is draw a label next to each of the arrows. If I remove the labels such as {cc} or {dd} etc. for all -> commands, it works, but it doesn't show labels next to the edges. 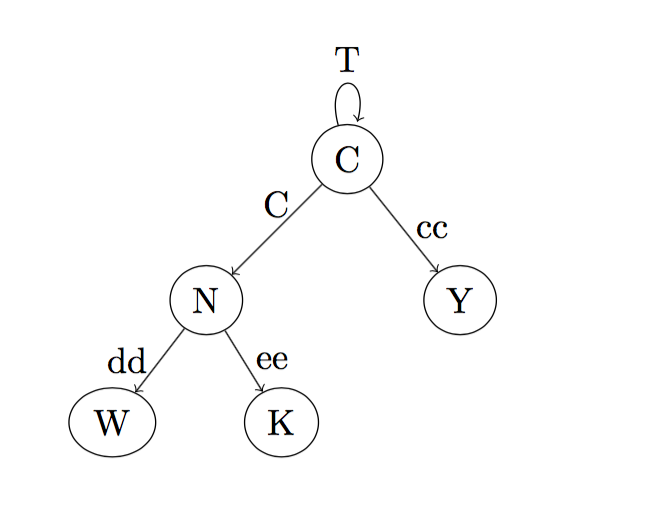 0
How to add self-loop to node in bayesnet?

13
Rotate a node but not its content: the case of the ellipse decoration
17
How to define the default vertical distance between nodes?
16
Numerical conditional within tikz keys?
7
Why do I get an extra white page before my TikZ picture?
12
Drawing rectilinear curves in Tikz, aka an Etch-a-Sketch drawing
9
Line up nested tikz enviroments or how to get rid of them
3
How to draw a square and its diagonals with arrows?
0
LaTeX Tikz: Compare two \def arguments
0
How to add self-loop to node in bayesnet?
2
Arrow between BTrees