One hline across a table with nested tabulars

I have a table like this, adapted from a template:

However, for each tabular here, I had to create a \hline for its own environment. Putting a \hline for the broader overarching tabular that the nested tabulars sits in (so I don't have to define \hline 2 times, only once) messes things up. Note - similar to this - Horizontal lines in nested tabular environment but slightly different.

How do I achieve what I want without requiring multiple hlines?

As you have your table and supose, that this is streap down some other, more complicated table, You can your code simplify as follows:

In both cases you obtain the same looks of table:

Does your output really look perfect? This is, of course, opinion-based, but I would suggest not to remove all space within a cell, as your text and rules are very close, even touching, making it difficult to read.

As for your table, I suggest just a regular syntax, with nothing special really. I've made a new macro to make formatting of headers a bit more consistant, and easier to change if you ever were to change your mind about how your headers should look.

I've also added an alternative approach, which gives your table a more a more professional look. Vertical lines are removed, as the reading direction here is horizontal, not vertical. The horizontal lines have been given some different and consistent weights, using \toprule, \midrule and \bottomrule from the booktabs-package. These are used above and below headers, and end of the table, not between regular rows.

I've also added the caption-package, which has some very nice features for customising your headers, and gives some better spacing by default for tables than the regular approach. 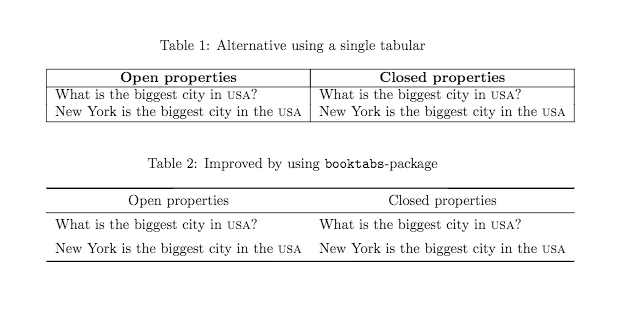 Not the answer you're looking for? Browse other questions tagged tables tabularx multirow or ask your own question.