I am a newbie here. I want to redefine keymaps of math symbol in auctex I wanted 'I to be \int and '8 to be \infty, so I changed LaTeX-math-default in auctex-11.89.4/latex.el as follows

But it doesn't work, and now when I hit '8 it show "` 8 is undefined" in mini buffer. Why is that? And how can I redefine them?

When else fails, read the documentation:

The variable LaTeX-math-list allows you to add your own mappings.

A list containing user-defined keys and commands to be used in LaTeX Math mode. Each entry should be a list of two to four elements.

First, the key to be used after LaTeX-math-abbrev-prefix for macro insertion. If it is nil, the symbol has no associated keystroke (it is available in the menu, though).

Second, a string representing the name of the macro (without a leading backslash.)

Third, a string representing the name of a submenu the command should be added to. Use a list of strings in case of nested menus.

Fourth, the position of a Unicode character to be displayed in the menu alongside the macro name. This is an integer value.

You can customize this option with M-x customize-variable RET LaTeX-math-list RET and see the following screenshot: 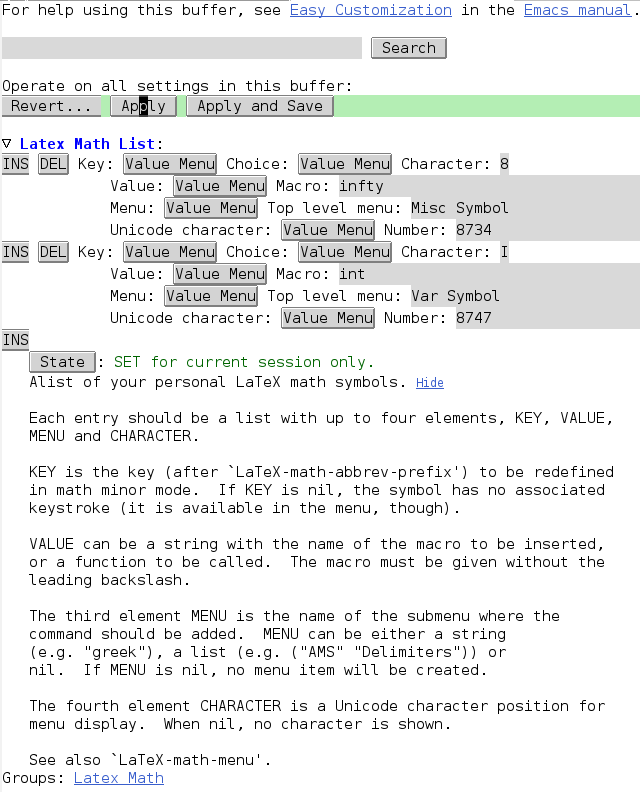 When you're done hit the "Apply and Save" button.

Alternatively, put this code in your init file:

AUCTeX is highly customizable, you should never manually edit the source code.

Not the answer you're looking for? Browse other questions tagged emacs auctex or ask your own question.