I have been trying to use a parameter description provided by @egreg. (see How to write a perfect equation parameters description? ).

That worked fine for me (I changed the style a bit from @egreg 's answer). I am however interested in adding the units as an additional column in this description.

Currently my example is as follows:

Is there some way of producing a code similar to:

However, I want the units to be aligned on the [-bracket, and not manually have to algin the spacing.

Is that possible? Can somebody help with the solution? Many Thanks already!

This is basically just a tabular, so you could add another column, by inserting at the line >{$}l<{$} @{${}:\enspace{}$} X@{}. Here, I've changed the two columns into l-columns, change this to what you need depending on how much spacing you want, or assign it specifically with for instance p{3cm}.

The columnspecification here seems a bit cryptics, so lets run through it. Here is the full line:

This are specifications for three columns, so I'll go through them one by one:

>{$}l<{$} Would be the first column. Here we see some syntax from the arraypackage, and we find some info in the documentation, table 1, page 2 about this syntax:

So, >{$}l<{$} would insert $ both before and after the contents of every cell in this column. The first cell here is set to \uptau, and it would then be transformed into $\uptau$. The column-type is l, for left-aligned.

@{${}:\enspace{}$}l This is really just a l-column (left-aligned), and the part in front is a syntax for the columnseperation. We see that because it starts with @. Since this is suppose to typeset math, we want the spacing the be consistent with that, and therefore $ are put around the \enspace, which is a length of whitespace. Have a look at What commands are there for horizontal spacing? for more info. A : (colon) is also inserted, to be output directly.

>{(}l<{)}.The mechanics of this is explained in the first column. In short it would add paranteses to the input.

Units should not be typeset in squarebraces. This is a very common mistake. Here, I would instead put them in standard paranteces.

I've also added siunitx, which I think you will find very useful. It is great for typesetting numbers and units, whether it is within text, math or tables. It has some global settings which can be changed easily to suit your countries preferences.

The first column of your environment will be typeset it mathmode. This can be seen with >{$}l<{$}. The code means that each cell will have $ both in front of and after it, so it will therefore be in math. You probably overlooked this, and tried to put $\uptau$ in the argument for the first cell. That would be a double switching, first into math mode, then into text-mode again, giving an error. To counter this, you seem to have put it inside \text{} again, which would introduce a triple switching. We could reduce all this clutter by simply using \uptau.

Correct me if I am wrong but in your equation, you seem to be using * as a multiplication symbol. This should in most cases either be typeset as nothing or as \cdot. Some texts liek to print it as a cross, with the \times-symbol, even though this has a very different meaning in math. I have taken the liberty to typeset the equation on three different lines, just to show the options. I would stick to the third one.

Note that you can always locate the documentation using the command-line/terminal by writing texdoc siunitx, and that works for any package. The documentation is also available at http://ctan.org/pkg/siunitx 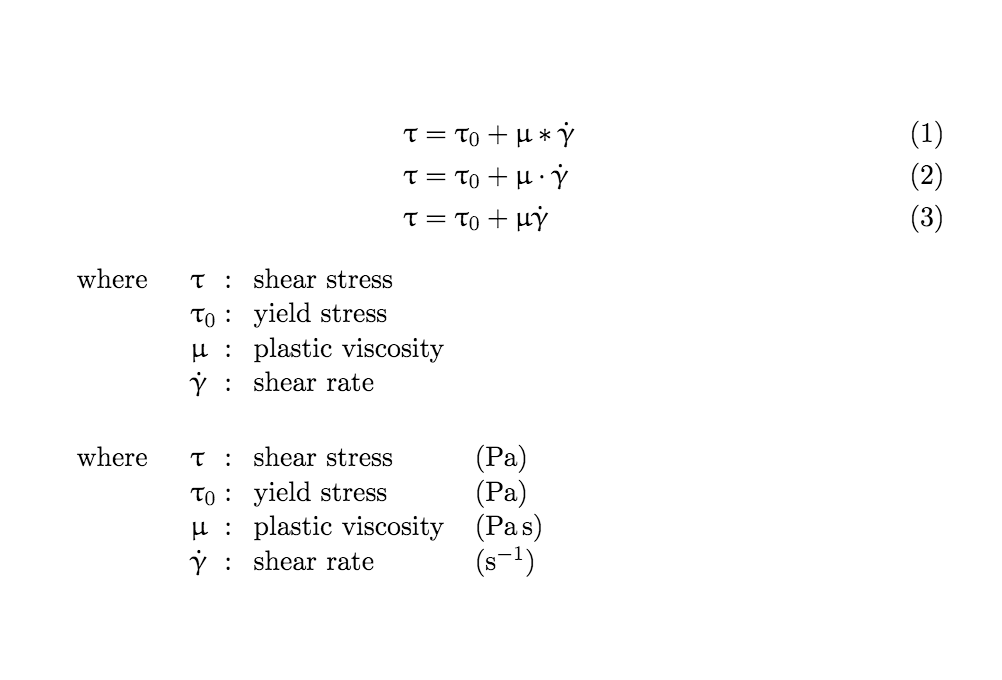 851
What commands are there for horizontal spacing?
100
How to write a perfect equation parameters description?