How do you display these things in inline mode (with all the nice inline formatting) as if they were in display mode ?

The inverse -- how to display things in display mode as if they were in inline mode -- is also of interest.

There are two separate aspects to your question, which can be addressed separately:

The default settings, with the amsmath package loaded, are

These possibilities are illustrated in the table below: 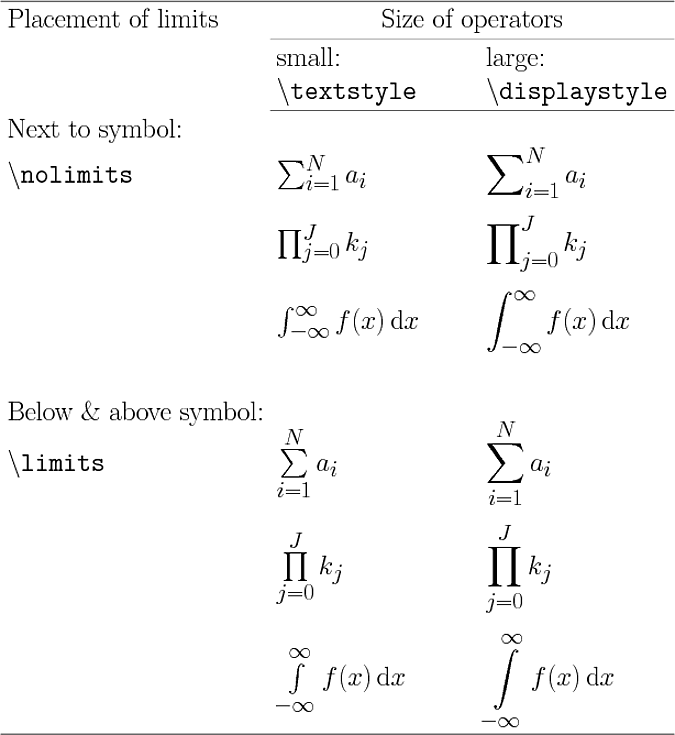 The table was produced by the following code:

Finally, some personal views on the (ab)uses of the \limits and \displaystyle commands when in inline math mode:

The other answers are excellent, and normally I would not try to change the behavior of inline functions. However, there is one case where I wish inline functions to behave just like displayed functions. That is when I write exams. I am willing to compromise on typesetting for readability. If you put

Good typography relies on the balance of all aspects of black and white on the page. Uniformly spaced lines for the ordinary text make for good legibility. That's why some symbols, that in display are rendered with limits above and below, are set with limits on the side when used in in-line formulas.

I too, when I began to use TeX, tried to set limits for sums above and below also in in-line formulas, but I soon realized that it's wrong: two white bands separated that line from the next ones.

For that very reason the symbols for summation and integral are set in two different sizes: a smaller one for in-line formulas, a larger one for displayed formulas that don't have spacing constraints.

would produce the same symbol used in displayed formulas and set limits above and below. But this will damage the balance of the page beyond repair. A less invasive construction

will do less damage to the page, but will nevertheless spoil it.

Such constructions have their use, for examples in tables where TeX would use in-line math mode. But I will never suggest to use them in normal text.

The solution you seek is to use the \displaystyle command within the inline environment as such.

This will give the nice effect of the starting term being underneath the sigma and the maximum value above while keeping the symbols inline.

40
How to get n=1 under Product character (\prod or \Pi)
18
Putting the integration bounds below/above the integration operator
5
Subscript of bigcap in Beamer
4
Subscript of sum
3
Typesetting a big sum with index next to it
2
sum sign in conditional expression
2
Formula in displaystyle but operator limit in normal subscript position
1
Lower bound placement in summation sigma sign
2
How to make Fractions in \array environment from being tiny and squishing up?
1
argmin doesn't work in algorithmic table
See more linked questions