How to center the higher glyph(s) in a `\stackrel` or stretch the lower glyph?

I currently am using a relation

but unfortunately, the \mathbb{L}^1 is not nicely centred over the = symbol. 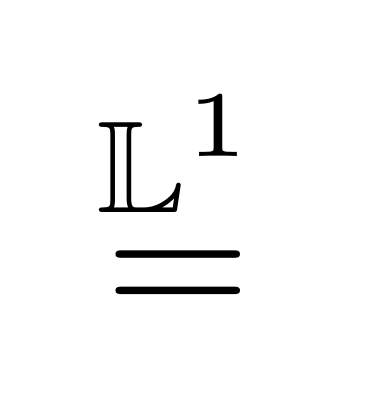 I read some other answers that involve shifting the upper glyph to make it appeared centred, but in this case I think the \mathbb{L}^1 is wider than the =, so maybe I have to "stretch" the =?

Alternatively, if someone could explain the code a bit from answers such as from here, that would be great as I reckon I can just use that instead.

Some fine tuning is necessary.

First, we have to remove the small space that TeX adds after superscripts, which is \scriptspace. Second, we can compensate the hole due to the conflicting shapes by doing \mathbb{L}^{\!1}. Finally, a thin space before the “L” helps in centering. The whole thing is set in \mathclap, so it won't count for the width of the big symbol. 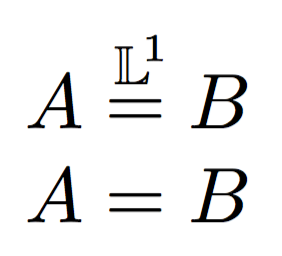 Here's a “boxed” version that shows the horizontal size is the same. 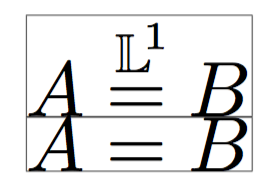 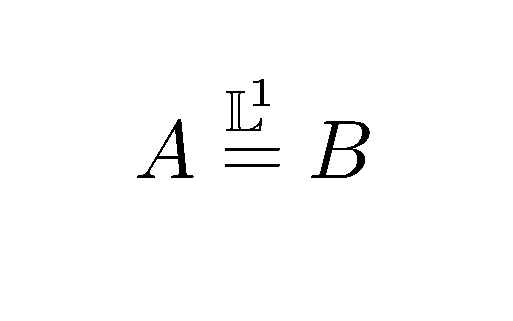 Certainly, \mkern can be also in other places, e.g.,

You can remove \scripscriptstyle if you think it's to small. The \mathrlap is key here, because makes the superscript take zero space.

Not the answer you're looking for? Browse other questions tagged math-mode typography kerning stacking-symbols or ask your own question.

5
How can I adjust the fine positioning of stackrel?

5
How can I adjust the fine positioning of stackrel?
9
How to center text under math symbols
13
How can i shrink (or expand) the vertical spacing in \stackrel?
7
Creating a customizable n-ary operator?
2
Stackrel and footnote inside the math environment
2
Define a symbol with \stackrel, that works inline without changing the height of the line
7
`\stackrel` but lower
2
Where are basic mathmode symbols stored
5
Color lower half of the $\ge$ symbol
11
Partial tensor product sign