LaTeX math as an image of a specific size

I know very little about TeX and LaTeX, but I often encounter strings containing markup described as LaTeX, because various tools, including MathJax, SymPy and Apple's Grapher, use LaTeX as a lingua franca for math. A user can often right-click on a nicely-formatted equation in a GUI and get a representation of it "as LaTeX" or call a method in a script and get a string described as containing "LaTeX markup". (I don't know if I'm using the correct terminology.)

I'm trying to take such a string and use automation to turn it into an image of a specific size (625 x 465 pixels as an example) with the equation expanded or shrunk to fit the image, or, failing that, at least centered.

The results I get are never quite right: 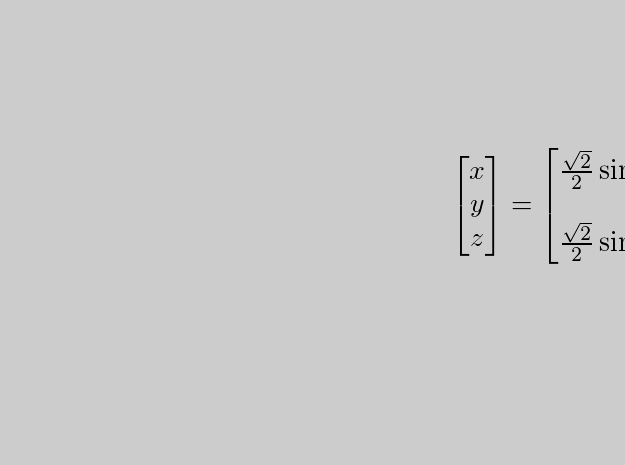 Others are the correct size but blank (especially using standalone with options other than preview).

How can I produce images of the specified size that look right? Does anyone know a combination of a TeX document template into which I can insert the math markup, and a dvipng command that will convert it correctly?

I've been keeping a catalog of attempts in a Jupyter notebook. If necessary, maybe I could put all 31 (and counting) attempts on a Gist or something, with the .tex files, latex commands, dvipng commands, and result images.

In the end, the easiest way to get what I wanted was to use the preview package with the tightpage option in the .tex file, and use the convert command from ImageMagick to expand the image.

This is the template I use for the .tex file:

Some of the packages and options might be unnecessary, but the above works for me.

Then I run this latex command (substitute your working directory for /bar):

Then this dvipng command (I have to choose an appropriate value for the -D option manually):

Then this convert command:

To get the necessary tools installed I ran:

Not the answer you're looking for? Browse other questions tagged equations standalone png dvi or ask your own question.

0
make image of a mathematics formula for inclusion in OneNote

2
Is it possibile to report the baseline of a dvipng converted image without using preview-latex?
5
LaTeX, dvipng and pipes
16
I'm using the standalone package. How can I get regular paragraph breaks?
2
Warning for TeX main capacity exceeded when loading files with \pgfplotstableread
18
Training Tesseract with generated LaTeX files
2
Standalone not getting the figure size right with pstricks! (MWE + Explanation included)
5
Using externalize with standalones for tikz figures? - (output-directory and tikzexternalize)
4
preserving pixel resolution when converting to PDF
1
crop paper size to image size