When using the following minimal example to draw 3 lines with pgfplots respectivly tikzs, you will obtain a pdf with three lines:

The Result (Adobe Acrobat XI Pro.) will look like this: 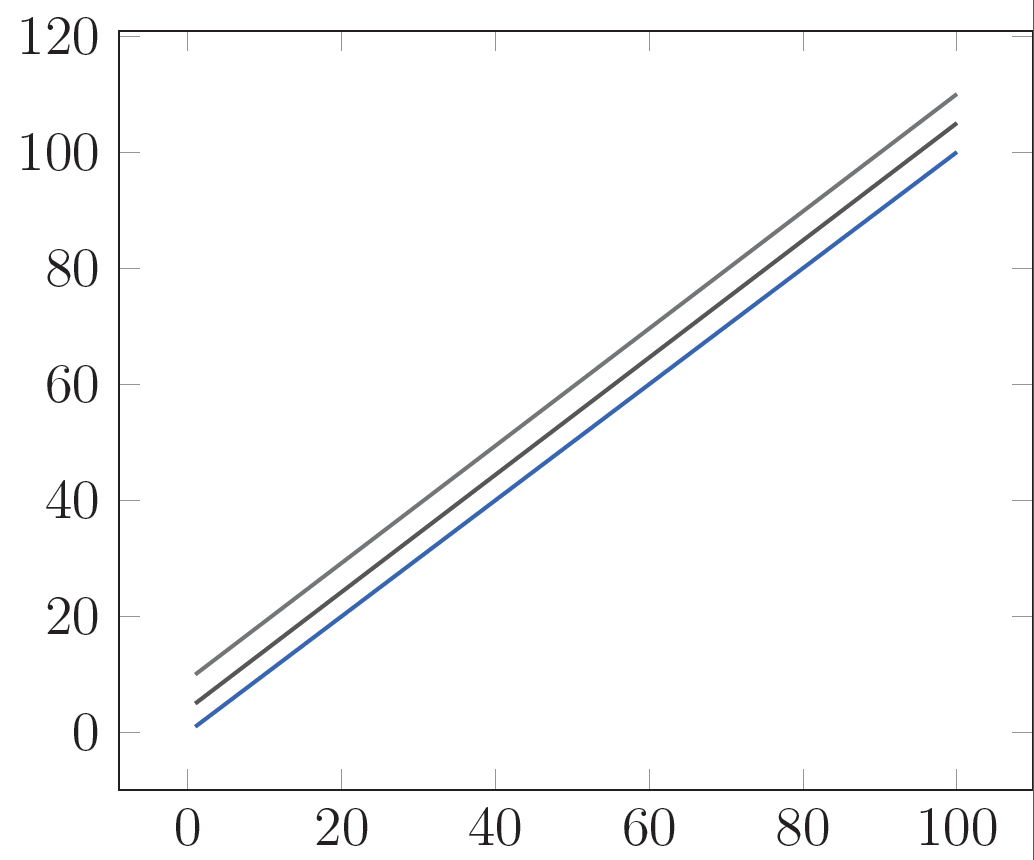 at least for the color simulation profile U.S. Web Coated (WOP) v2, which Adobe Acrobat XI uses as the default (I assume again) and which is probably the reason why the colors appear as they look on the screen. You could also pick something like Adobe RGB here and then the two gray colors would look absolutly identical, which you can see here:

Anyway - if I get it right: The printer will use a lot of color for the parulagray01 (pseudo gray) color, as there is a lot of C, M, Y specified and I think it is called rich gray or rich black (a gray/black tone that will look gray/black in print but actually uses a lot of color).

Now the question: Is there a simple command to tell pdflatex (or maybe the komascript package or maybe the xcolor package - I don't know where to put it) to interprete all rgb colors that have three identical components (e.g. parulagray01 from the preamble, which uses r=0.33527,g=0.33527 and b=0.33527) as real gray scale colors and not to convert it to some rich gray or rich black color?

I realized that there are some options in Adobe Acrobat XI Pro to convert colors from one color space to another but I don't really understand it, yet. I played around a little bit and managed to get rid of rich gray in some vector graphics. But when I tried the inkov command of ghostscript (9.05 and higher) all pages (even those with text only) had C,M,Y and K components after the conversion by Acrobat, although the Output Preview showed in Adobe showed only K components. Is it even necessary to think about such color problems right now, when writing a PhD-Thesis, as the publisher will take care of the color management of the pdf? Does someone know how to convert all grey colors from rgb space to real gray colors in gray space in the whole document with Adobe Acrobat XI pro without affecting the real colors in the document? Does someone know, which things/aspects can typically go wrong about color specs in a PhD-Thesis, when working with LaTeX (tikz, pgfplots) but also having some *.eps vector graphics from other sources (such as Corel) embedded in the document, and therefore should be considered very early instead of having problems later?

without the redefinition the test file below shows the two forms in the log:

showing the same gray model is used for both inputs

Not the answer you're looking for? Browse other questions tagged tikz-pgf color pstool or ask your own question.