How to create an unnumbered algorithm with a caption?

Of course, the above is not LaTeX, just wishful thinking. What can I do to get an unnumbered algorithm with a caption?

If I understand your question correctly, you could use the \caption* command from the caption package to typeset the caption without label; a little example: 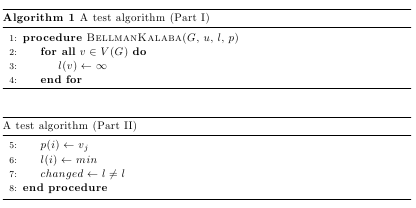 I suggest using the \ContinuedFloat command from the caption package instead and marking the second part as "continued":

See the caption manual if you want the label, not caption, text to hold the "(continued)" word.

To follow on @Gonzalo's answer, I would duplicate the caption of the second (continued) part of the algorithm in full (using \caption*). Credit to him for the answer:

With a little work it would probably be possible to supply modify \caption so that an additional argument to \caption* could be the previous algorithm label, so as to produce the above result automatically.

Not the answer you're looking for? Browse other questions tagged floats numbering captions algorithms or ask your own question.

32
Is there really something wrong with using the caption package for \ContinuedFloat?
2
Divide algorithm inside If EndIf

5
Algorithm over two pages, with itemized lists
5
Disable Algorithm Numbering
16
Styling a lstlisting caption using caption package
10
Algorithm as figure and without italic and bold formatting?
2
How to create a short caption (as \listoffigures entry) with \twopagepicture?
1
Moving caption of the algorithm upwards
0
Split caption based on a height?
0
How should I express/typeset a caption-ish comment on a figure?
2
Algorithm inside a tcolorbox: how to put a label to the algorithm but the caption as title of tcolorbox?