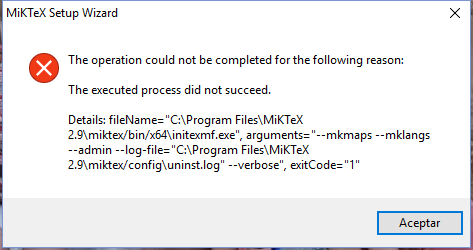 Can anyone help me, please? Thank you. Víctor

As mentioned before, I just reinstalled Windows 10 x64 again. It was not a matter of MikTEX but the operating system. On the other hand, I also downloaded all the packages (not the basic installation of MikTEX). Having experienced this full installation, I can say I prefer this way due to the computer does not need to connect and download packages when compiling.

Thank you so much.

Something similar happened to me today. MikTeX update downloade two packages and aborted the package database update, for some problem.

I repeated the update process and learned that both packages were already installed. Therefore I loaded MiKTeX options and manually instructed "Refresh FNDB" and after that, "Update formats".

One week earlier, I have a similar problem with mkfntmap.exe; what I did was to open a command window in C:\Users\Denis\AppData\Local\Programs\MiKTeX 2.9\miktex\bin, and ran "mkfntmap.exe --force" and the program run without problems.

Just as a precaution in both situation I turned off my antivirus program.

Not the answer you're looking for? Browse other questions tagged miktex installing or ask your own question.