Should subscripts in math mode be upright?

In one-letter subscripts, like $x_i$, the subscript is usually typeset italic.

Is this the typographically right thing to do? Consider this case:

The Boltzmann constant is often written as $k_B$, which is short for $k_{Boltzmann}$. But the lengthy Boltzmann looks strange if typeset all italic. So I usually write $k_{\mathrm{Boltzmann}}$.

But shouldn't then, for consistency, the B in $k_B$ also be upright? And how about the i in $x_i$?

Using "all italics" is unfortunately an often committed sin. You should italicize only variables.

Everything else should be upright. For example:

Exceptions to this rule may still apply, i.e. the Euler-number $e$ is no variable, but still traditionally written in italics.

Some of the above was stolen from the "Please Make A Note" blog. More detailed information can be found in "Typefaces" from NIST.

\text is not the right command to use, as its argument will be typeset in the current font, which may be italics.

What subscripts are to be set in upright font and what in italics is well explained by Boffin. (I disagree about the d for the differential, though, but that's another story: be consistent, that's all for this particular aspect.)

For me it depends on the context. Using your example, I would agree that you should use $k_{\text{B}}$ since it is short for $k_{\text{Boltzmann}}$. Note the use of \text{...} from the amsmath package, that does a decent job of sticking to the math mode font size, depending on the context.

On that note, $k_{Boltzmann}$ "looks strange" because (La)TeX typesets it like it does regular math, which in this case is the variable B, followed by the variable o, followed by the variable l, and so on. My use of the term "variable" may be incorrect. The point I'm trying to make is that each letter is treated on it's own in math mode, rather than combining them like is done in text mode. The spacing is correct as-is in math mode, it just doesn't look like text.

With this discussion in mind, I hope you agree that $x_i$ should remain $x_i$. Of course, if you are referring to i in your text somewhere (instead of $i$), then it should be upright. IMHO, it is all (mostly?) driven by context.

Based on egreg's answer and Henri Menke's comment, here's a comparison between amsmath's \text, \textup, and \textnormal commands. From the three, only \textnormal is immune from the outer text mode format, as the name says. 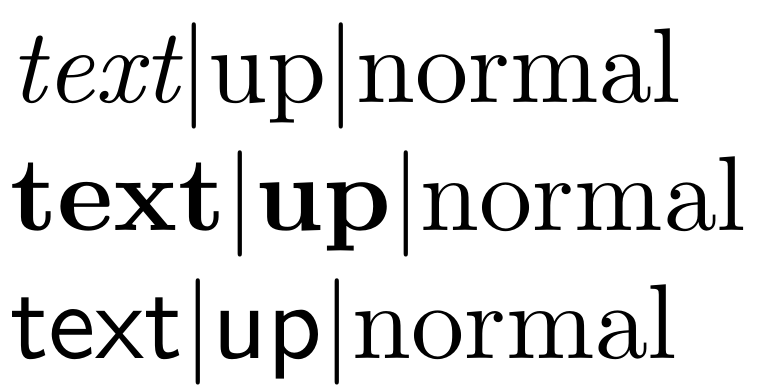 Boffin's answer already provides the correct information. I just want to add to the discussion 'elementary charge' vs. 'Euler number' in the comments:

All in all, the document by NIST which was already linked by @Boffin, provides a concise and complete summary.

This is matter of personal style. In my own documents, I follow similar rules: if subscript stands for people's name I type it using \text command (defined in amsmath package), e.g. $\varepsilon_\text{F}$ (the Fermi energy), $a_\text{B}$ (the Bohr radius), $r_\text{D}$ (Debye's radius), etc. Russian indexes are usially typed upright: $P_\text{т.и}$ (power of bremsstrahlung).

Not the answer you're looking for? Browse other questions tagged math-mode typography italic or ask your own question.

5
Should superscript and subscript be upright in this case?
61
Which command should I use for textual subscripts in math mode?
7
Typeset subscript material automatically in upright font shape
14
When should math be upright?
3
How to typeset upright ħ?
-4
How I can create a graph of forces - tikz?
4
Can this code be more compact?

61
Upright parentheses in italic text
4
Too long/short pipe (absolute value) in math mode with certain letters
61
Which command should I use for textual subscripts in math mode?
7
Combining Textstyle and Displaystyle
16
Fixing mathit spacing with unicode-math
1
Using letters from math font in text mode
2
math mode - subscripts in upright font by default