Given a control sequence \z that was defined like \let\z=z, how do you get the catcode the character z had at the time \z was defined?

seems to work at the first glance, but it gives the wrong result 11 because '\z isn't interpreted as the previously defined control sequence but just another denotation of the character code of the letter z.

when it fails with

This question deals with a similar problem, getting the character code of such a control sequence, but I don't see a way to use it for this problem as \meaning only returns characters of category 12 and 10. 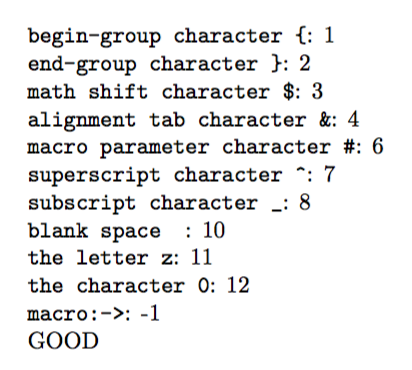 You do want the same general idea as in How to get character code defined with \let (! Improper alphabetic constant), but you need to use the text of the \meaning. An example which covers three cases (space, letter, other), and which extends naturally to the other cases:

This is all expandable so it can go into the argument of \catcode or similar. I've not added any defensive code in case \z here is a macro which might contain the test string, a chardef, etc., but one can extend the idea.

Not the answer you're looking for? Browse other questions tagged tex-core catcodes or ask your own question.

7
How to get character code defined with \let (! Improper alphabetic constant)

13
How do I get the category code of a character that is the value of a control sequence?
20
How to print and assign category codes?
7
Why are some characters not allowed in command sequences
14
Why does the TeX scanner process tokens for register numbers and macro names differently?
6
Scantokens and Let
1
Is there a way to change the character a particular byte maps to?
3
Setting the backslash's catcode
3
Are there any significant differences between letter and other catcode in stored token lists?
5
Cases of different tokens having same meaning and same \string-representation that can occur in the stage of expansion