Want to improve this question? Add details and clarify the problem by editing this post.

I've tried to make a bash script that uses pandoc in conjunction with LaTeX to convert my university notes from markdown to PDF. I initially copied the idea and script from someone of which I've edited the script and forked the project, the script I'm having the error with can be found here: https://github.com/alifhughes/notes/blob/master/compile_notes.sh

I'm really new to pandoc, LaTeX and everything that comes with it so I feel i might have left something out during installation of all these components. Currently I've installed: BasicTex, pandoc, ack (used in the script), Ghostscript and luatex.

When I run the script in my shell I get the following error: 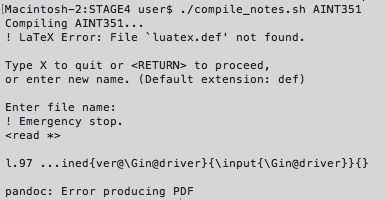 My first thought was to install luatex, which i've done, as it was missing some .def file from that, but it hasn't solved the problem. I think this is similar to this problem also posted on the tex stackoverflow: After MiKTeX update when using LuaLaTeX: Package pgf Error: Driver file ``pgfsys-luatex.def'' not found

But if I'm 100% honest a lot of that is completely Alien to me and doesn't make much sense.

Does anyone have a possible idea of what could be wrong?? Thanks in advanced!