I state a theorem in the main body of a document and prove it in the appendix. I use thmtools's restatable environment to restate the theorem there. However, I now need to have my appendix in a separate pdf file (hence a separate tex document). I'm using xr and xcite to get the cross-references and bibliographical references to play nicely.

But the commands created by restatable are not carried. Is there any way to to the restating of the theorem in the appendix in a separate document?

tcolorbox package provides some macros for saving the content of boxes and use it later.

The simplest example could be:

In previous code saveto option, saves the whole tcolorbox content (upper and lower parts) in file myfile.tex. It saves only the contents, not the format of the box.

Option lowerbox=ignored makes that the lower part (the prove in this case) doesn't appears, but it is saved.

Later on into the same document, or into another document, myfile.tex can be restated as a tcolorbox content.

I'll try to show that example shown in https://tex.stackexchange.com/a/224429/1952 can be also applied with an external document. The first document will contain theorems and proofs, although only theorems will be printed, while the second one will show theorems and proofs. This solution applies an invisible box (blankest in tcolorbox nomenclature) as OP wanted.

The document with theorems and proof is called TestTheorems.tex and its content is:

It declares a theorem tcolorbox whose contents will be saved (saveto option) in different files, one for each theorem. The name of this files is alse recorded (record option) into an auxiliary file called TestTheorems.record. This auxiliary file is created with comman \tcbstartrecording and is closed with command \tcbstoprecording.

After processing this file the result is: 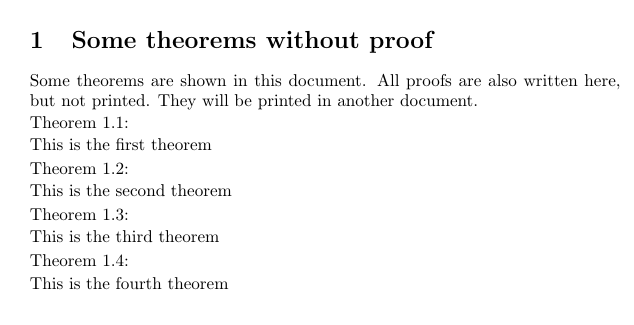 but also a folder theorems with four files in it, one for each theorem, and the file TestTheorems.records into main folder.

The second file TestProofs.tex contains the definition of tcolorbox which will read all recorded theorems and proofs. And with xr help, they will keep their original names and numbers. Command \tcbinputrecords declares which file will be read. Being an external file, it's necessary to indicate the name as an option. 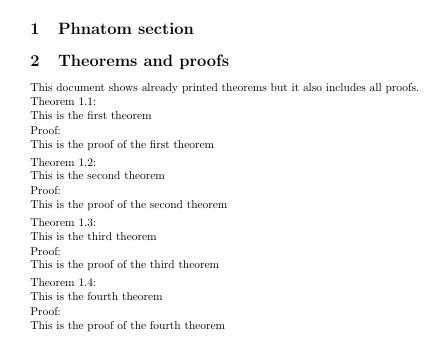 Not the answer you're looking for? Browse other questions tagged cross-referencing theorems thmtools xr or ask your own question.

0
Re-calling/re-printing a theorem from an external document
37
How to place all proofs automatically in appendix?
13
How to defer content to a later part of the document?
7
Hide content to show later
1
Put the proof in appendix, with links between theorem and proofs
2
How to gather tcolorboxes at the end of a document

4
Amsbook: Theoremstyles definition and remark identical?
10
Splitting(!) one latex document into two pdf outputs including references
0
restate theorem (numbering issue)
1
No new line for theorem in enumerate
1
Include references to appendix without including appendix
1
Conflicts between subfiles and caption packages
2
Ultimate proof at the end/in appendix: different sections, with references to proof/theorem, restate, and synctex