I have defined a custom environment with an option to either display a title or not (using the \xifthen package, I am not sure if that is the best approach but works so far).

Now, aside from the option to not show the title (and thus also not step the counter), in my document I would also like to be able to have a second option to repeat the contents of an environment already printed earlier, so that I can refer to Test 1.1, for example, in a subsequent section or chapter again, but still reflecting the number from where it first occurred, i.e., 1.1. 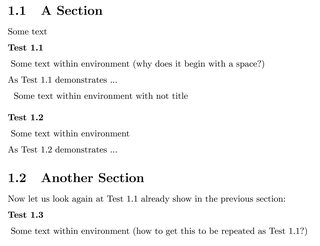 BTW, there seems to be also a weird space in the first line of the environment, where I have no clue where it's coming from. Anyone able to spot the error?

Note: In the end I plan to include the individual parts using the environment by using \input{filename.tex}. Ideally I'd like to have the \begin{myenv} label{somelabel} line in that filename.tex, so if there was a way to let it repeat the numbering automatically when it finds a label that is repeated that'd be wonderful. Or is that too much to ask for? If this is too complicated I could also \begin my environment before \inputting the file.

EDIT: Maybe for the latter scenario it would in fact better not to \begin, \label, and \end the environment within the file to \input but rather to define a command that would take as argument the {filename} and execute

Nonetheless I would first need help figuring out how to implement the option that would let me repeat environments. Any suggestions highly appreciated.

EDIT2: Clarification: Ideally I'd want to have three options of repeating an environment.

(1) The contents without a title (this works fine as I've implemented it but maybe there's a better way):

(3) Repeat only part of the content (i.e., \input a different file) but repeat the title.

I propose a slightly different environment interface using a key-value approach. The keys that are defined include 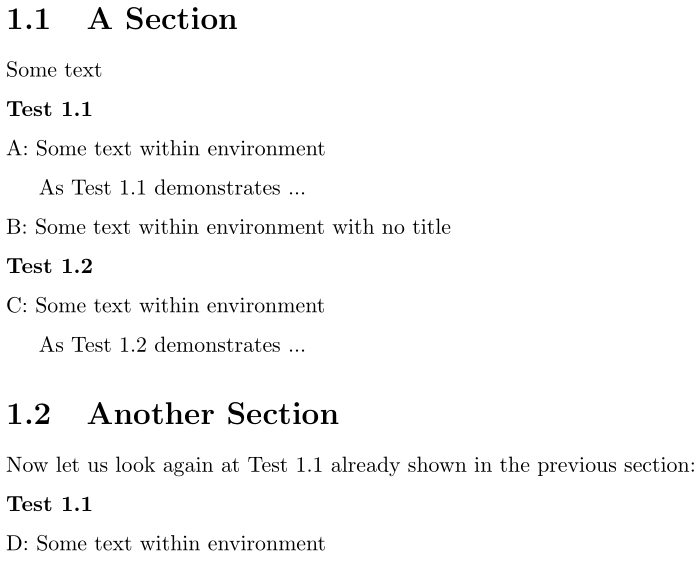 You need to use % to avoid the spurious spaces. This has been taken care of as part of the label key-value feature.

Not the answer you're looking for? Browse other questions tagged cross-referencing environments counters or ask your own question.

18
Percent signs - “comment” and “active” both at once?
5
Use second argument for optional first argument if not provided in macro
3
How to define a custom environment caption for table of contents?
0
hyperref--xkeyval interaction? \reserved@a ->\@nil error
0
Custom environment numbering dependent on documentclass